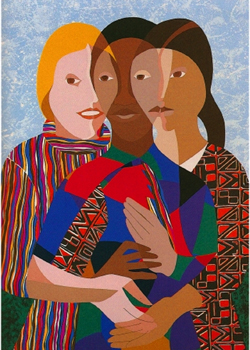 The conference, which took place in the Eastern town of Nsukka, during an unusually dry week in July (precipitation for this month is normally high in the region) kicked off jubilantly, matching the expectations of the excited delegates.

The camaraderie was short lived however. On day two of WAAD, all hell broke lose. Unexpectedly, the programme convenor, professor of women’s and African studies, Obioma Nnaemeka, found herself having to respond to the question of whether or not white women (about one fifth of the seven hundred or so participants) should be able to “present papers on black women’s experiences”. Some delegates felt that white women, complicit with discrimination against black women in their home countries, should not be allowed to take part. The sessions should be a safe space for black women, they argued.

Nnaemeka organised an open session to discuss the issue. A disaster ensued. People broke down. There was weeping and shouting. The black delegates who had raised the issue threatened that they would not to participate if white women did. This created tension among black women because it was a group of African-American and Black-British women who demanded the exclusion while women from the hosting country vehemently opposed it. Pushing out visitors of whatever race was contrary to Nigerian, Igbo (to be precise), customs, they argued. When the exclusion of a Bulgarian woman married to a Nigerian man was announced, the Nigerian delegates shouted, “No one, black or white, has the right to insult our wife”.

Then suddenly like a rainstorm during a drought, a delegate, of (African American heritage) suggested a dialogue about power relations between the oppressor and the oppressed. Others agreed; the best approach would be to talk openly about racism and how it affects women. The chair of the local organising committee, Julie Okpala, in a personal account of the session described how “the conflict was resolved by a decision to allow white participants to present their papers” while women of African heritage still had an opportunity to explore their different realities in a separate space. Peace was restored and the conference proceeded, if more carefully.

Compare the WAAD conference to “Feminism’s Online Toxic Wars“, an article published in The Nation in January by Michelle Goldberg. In the piece, Goldberg argues, that online feminism has become so toxic it is damaging the feminist movement. The toxicity is seen as arising from a form of intersectionality that Goldberg calls the “dogma that’s being enforced in online feminist spaces”. While the article is resonant in parts (I also have taken issue with Check Your Privilege type intersectionality before), it is nevertheless an example of hype. And as Public Enemy said, don’t believe the hype! The politics of feminist solidarity has consistently troubled easy binaries such as the black/white binary (as The Nation article disingenuously implies). Yes there is a tiresome trend of finger pointing among some feminists on Twitter but if Goldberg had eschewed stylish trickery to instead look more closely into feminist debates and discussions it would have become clear that what often seems to be “online trashing” is in fact an outcry analogous to the one that occurred in Nsukka in 1992.

Why do these outcries happen?The simple answer is because some women, particularly white women with visibility and influence, all too often use (without consciousness sometimes) the very devices that patriarchy uses to dominate women – namely dehumanisation. We see such devices at play in caricature cakes of African women or in videos by white artists that use black women as tropes. Women of colour remain hurt that their sisters neglect or are complicit with legacies that continue to injure black populations so widely. This is why the Nation piece is divisive. It is a four-page article on a reaction with hardly any reference to the cause. It is not so much the bitterness of race exclusion but rather the lack of sympathy and outright ambivalence towards it.

Returning to Nsukka briefly, where there is perhaps no right or wrong to be found in the controversy. The conference was not for but about African heritage women so the white participants had every right to be there. At the same time the systemic exclusion of black women in the west causes deep, legitimate wounds. Nsukka demonstrates how important it is to communicate, and to voice difficult feelings such as anger and hurt, in order to find solutions.

And it is here that I see a vital role for conscientious feminism.

Before sharing my ideas of what conscientious feminism means in practice, I want to quote the opening line from Edna St. Vincent Millay’s poem Conscientious Objector to briefly set the tone. “I shall die but that is all that I shall do for Death”Millay begins. Death in Millay’s poem is a metaphor for any individual, authority or forces that causes war and injustice. In this opening line, Millay is simultaneously recognising such powers and registering her defiance.

Let me now express my stance toward patriarchy by changing the wording of Millay’s line: I shall live but that is all that I shall do for Patriarchy. What I mean by this is that merely by being alive – meaning being in existence – within a patriarchal society a woman is participating in it. In other words, although a woman might have some choices to the extent in which she participates in patriarchy, she does not have the choice to not participate in it at all. As long as she is alive she must be part of the “familial-social, ideological, political system in which men—by force, direct pressure, or through ritual, tradition, law, and language, customs, etiquette, education, and the division of labour determine what part women shall or shall not play, and in which the female is everywhere subsumed under the male” as is Judith Bennett’sdefinition of patriarchy.

But don’t allow this unavoidable predicament of women’s lives under patriarchy to dispirit you. Although it is impossible for any person – woman, man, trans, intersex – to avoid the effects of patriarchy, this predicament also provides opportunities for women to live conscientiously. Simply put: to live with careful and critical attention to her conscious choices.

Having considered patriarchy’s undermining forces, I want to turn more directly to feminism – the social, cultural and political (and for me also spiritual and philosophical) language of those who seek to break down patriarchy.

First, read these later lines from Conscientious Objector in which Millay, still referring to Death, writes:

“I will not hold the bridle

while he clinches the girth.

And he may mount by himself:

I will not give him a leg up.”

As feminists who oppose patriarchy and as women who must live within it, our feminism is conscientious when it does not give patriarchy “a leg up”.

Conscientious feminism seeks to understand the systems, structures, attitudes, institutions, rituals, traditions, laws and customs that oppress and subsequently finds them intolerable. Not just the oppression of women of one’s race, one’s age, one’s tribe, one’s class but of ALL women. Conscientious feminism is feminism that dares to address uncomfortable truths in order to empower all women to be their full selves.

This is not the same as everyone getting along. In fact it is not about a Group Think at all. We need fierce debate, constructive argument and critical observation to move forward. But it is about moving forward rather than getting stuck. Nor is this is to suggest that conscientious feminism does not face challenges in practice. In Our Sister Killjoy, Ama Ata Aidoo writes, “We are the victims of our History and our Present. They place too many obstacles in the way of Love. And we cannot even enjoy our differences in peace.”

In a similar vein, dissimilarity across divisions of place, identity, belief, race and so on, pose an enduring challenge to conscientious feminism. When we allow our differences to create unbridgeable “wars”, we take away the joy from our feminist practice. And if we do not enjoy being feminists, then what is the point? Then we become feminist robots more committed to ideology than to transformation. To be clear, I do not mean that feminists should not disrupt society’s idea of joy and happiness with our critiques. As fellow Media Diversified writer, Sara Ahmed, writes “Feminists do kill joy in a certain sense: they disturb the very fantasy that happiness can be found in certain places.”

Rather, what I’m saying is that we should feel excited to be part of a global movement, feminism, particularly because it confronts the complicities of a system that tries to convince us that we can be perfectly happy as oppressed beings.

Conscientious feminism doubles our focus: to others and to the mirror of the self. Only if we are vigilant to our own positions within a feminist network, can we attend critically to our dissimilarities with others. We may still go home to lead separate, different lives, but as people in the business of eliminating male dominance we aspire to think – not the same – but in collaboration.

Returning then to my earlier examples of WAAD and Goldberg’s toxic Twitter wars article. In the first example the woman who suggested that WAAD delegates hold a frank conversation about the racialised elements of the conference approached the situation conscientiously. Her actions enabled WAAD to proceed and important knowledge was subsequently shared. In retrospect, had the organisers approached the planning conscientiously, then perhaps they would have ensured the topics of diversity, privilege and racial oppression were a part of organising structures and the conference programme.

In the other example, the Nation article, the lack of a conscientious approach to the analysis gave patriarchy a leg up, as Millay might put it. Following the publishing of the article, a new hashtag, #BigBadWolfFeminism, sprung up and patriarchy laughed at the regurgitation of conflicts that continually derail feminism.

Again, let us emphasise that practicing conscientious feminism is not refraining from vigorous debate or dissenting opinion but rather to aim is to do so in ways that are not complicit with the numerous ways in which patriarchy works to fragment cooperation and dialogue.

Conscientious feminism is not an answer in itself: it should not be seen as a conclusion. Rather it is a compass that can be used to navigate the labyrinth of oppression. When we apply conscientiousness to feminism, spaces of critical and intense dialogue about complicity, disappointment and privilege are created. We form new coalitions, not for the sake of it, but in order to reinvigorate our movement with purpose and excitement. Indeed, we practice feminism with our twist of Millay’s words in mind: I will live, but that is all that I will do for Patriarchy.