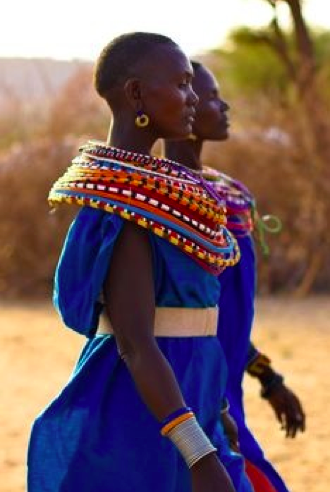 “Blue is a Feminine Color in Africa”

From the myth of the goddess Asi of Liberia to women’s ritualistic use of the blue gemstone Lapis Lazuli in Kemet (Ancient Egypt) and the indigo blue Adire of Yorubaland, many historical African representations of the color blue as a powerful color are linked to the female sex. By contrast, in contemporary westernized global culture, blue as a powerful color is associated with the male sex. When a baby boy is born, a majority of products targeting him – cards, clothes, blankets, feeding bottles, toys, etc. – are blue. Africans have imported the latter narrative, but even in the western tradition, as the originally blue-clothed portrayals of the Virgin Mary show, the color blue has a more complex history. My talk intertwines myth, history, culture, feminist theory, scientific research and personal observation for a new and fascinating exploration of the feminist principle that “gender is a construct”. It shows how we are deeply conditioned into our identities as male and female but also, within an African context, how we also are freer and less constricted to gender norms than is generally believed.

I’m thrilled to be presenting the above talk at the African Studies Association (ASA) Women’s Caucus Luncheon and Lecture 2018 this weekend in Atlanta. As the largest association of Africanist scholars, the ASA is an organisation to which I am indebted in its championing of the African Studies field and I look forward to contributing my thoughts to its body of work.

The talk will later be converted into a piece of writing.