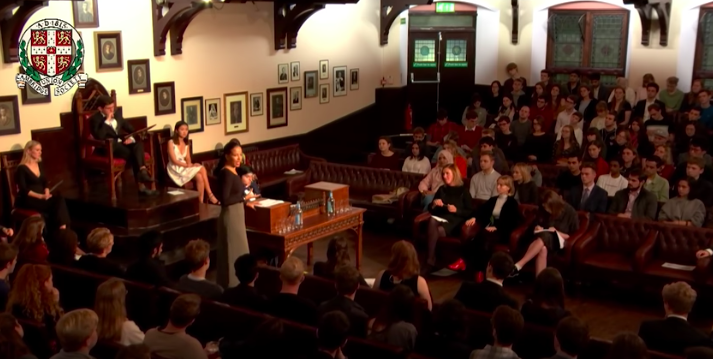 Me Too has lost much of the radical spirit with which it commenced for two key reasons.

Secondly because, “While Me Too has become mainstream, feminist ideas, theories and history have not”.

If you’ve followed my commentary in the past year, you know that I’ve been a supporter of The Me Too Movement, and I still believe that “Me Too has brought women’s rage to the fore, and that is incredibly powerful… But without the political insight and historical perspective to analyse it, it ends up only giving visibility to women’s rage, while failing to fully expose and challenge the structural and entrenched systems that cause this intense anger in the first place.”

You can watch the debate below, I’m the first speaker (two minutes in). The copy follows.

This House Believes #MeToo Has Failed

It is just a little over a year since Me Too became popularised and as we know there’s been a good amount of analysis about the movement in the past year.

As we approached the one-year anniversary, there’s been even more vital discussions about whether or not Me Too has failed or succeeded.

On the other hand, there are those who say that Me Too has failed because it has not been diverse enough or that it has focused on women in Hollywood and neglected other women especially those of disenfranchised backgrounds.

In truth, none of these positions can be neatly packaged together.

Yes, Me Too has sometimes celebrated a particular type of victim narrative which may not be useful for women in the long run, but it has definitely not gone too far in making men afraid. In fact, it has not gone far enough considering the stories of sexual abuse that continue to be shared every day.

It is also true that Me Too has not made space and given voice to all women, something which I have spoken about myself in a number of talks and articles. But it is not true that it has only affected Hollywood or the western world.  There’s Me Too activism in Japan, Kenya, Nigeria, Iran, and India is having a watershed Me Too moment right now.

Where Me Too has failed is not to do with it neglecting specific feminist issues per se, it is to do with failing to connect more broadly with feminism itself.

You may be surprised that I would make such an argument, you may be thinking that Me Too is definitely connected to feminism, after all, you read about feminism and Me Too in the tabloids and newspapers every day. But that’s part of the problem – a successful media apparatus has convinced us all that Me Too is representative of all feminism.

And this is the first significant error: putting the Me Too movement in the hands of the media, and therefore in the hands of the male establishment who owns the media. This is especially dangerous at a time when news and debate have become entertainment and drama with the ultimate aim of evoking strong emotional reactions to sell advertising through clicks.

At this point I should clarify what I mean by feminism because there’s an increasing diversity of definition of the term. By feminism, I am referring not only to the activism, the grassroots resistance, the celebrity endorsements, the think pieces, hot takes and so on but most especially to the centuries long women’s political and intellectual tradition that has produced an ever-evolving compendium of knowledge about how women can survive in a patriarchal world and simultaneously oppose it.

By knowledge, I do not only mean books and theory but also pamphlets, art, documentary, political speech, community work, museums etc. In other words, feminism is a body of work for women, by women about how to liberate women from the structural, cultural and institutional system of male dominance.

It is from this feminist compendium of knowledge that women have found solutions to oppression. From the nineteenth century until today, it is with feminist tools that women have strategized for suffrage, reproductive rights, girls’ rights to education, women’s rights to equal pay and sexual freedom, and their rights to be protected from religious and imperialist warfare. It is within this compendium that feminists created theory and strategy for consciousness raising, empowerment and intersectionality to name only a few feminist ideas that have changed the world.

And it is from this feminist compendium that Me Too has failed to seek the knowledge of how to end impunity of male violation of women’s bodies.

For decades, feminists have exposed and sought to destroy the dominant ideas and practices that enable ‘rape culture’, a term that second-wave feminists coined in the 1960s to describe the normalisation of sexual violence in society.

Already in the 1940s, Rosa Parks – more known for sparking the Alabama Bus Boycott – was a sexual assault researcher in the American south. In 1970, Susan Brownmiller argued that because rape is defined by men rather than women, men use it as a means of perpetuating male dominance by keeping all women in a state of fear. Feminists like bell hooks and Michele Wallace have analysed masculinity, power and violence in depth. Catharine MacKinnon, already in 1979 argued that sexual harassment needs to be illegal. This was seven years before the UK Court of Session would acknowledge that sexual harassment can be a form of discrimination. Anita Hill, whose 1981 allegations against then Supreme Court Justice nominee, Clarence Thomas, has been writing and lecturing about sexual harassment for decades. In fact, already in 1837, Sarah Grimke wrote that black women were “Employed by the planter, or his friends, to administer their sensual desires”.

In other words, feminists have hundreds of years of analysis about how to tackle sexual violence and harassment. The fleeting and fast-paced nature of the media does not easily allow for these critical connections to be made, but without this kind of historical context, Me Too is operating in a vacuum spending a lot of energy reinventing square wheels.

I have noticed, for example, that in most of the articles and posts discussing the Me Too era, there is no mention of feminism, no explicit connection to the ideology from which it erupted. There is merely the assumption that feminism is being discussed. At celebrity awards ceremonies and publicity events, there’s a lot of talk about the Me Too and Times Up hashtags, but hardly anyone mentions the term “feminism”, and certainly not the type of radical feminism that tackles dominance on a structural level.

Feminism is to Me Too what democracy is to the vote.  If there’s no democracy, then there’s no point fighting for the right to vote. Similarly, if Me Too is not informed and motivated by feminism then Me Too has no compass, no map to guide it in a direction that will bring it home.

Let me close by saying that Me Too has brought women’s rage to the fore, and that is incredibly powerful. My point is not to dismiss the huge impact Me Too has had on society. But without the political insight and historical perspective to analyse it, it ends up only giving visibility to women’s rage, while failing to fully expose and challenge the structural and entrenched systems that cause this intense anger in the first place.

It encourages women to break the silence on sexual oppression, but it doesn’t embolden them to listen to what feminists have been saying for so long.

This is not simply a failure, it is a calamity. The problem feminism has always had is it that it was not heard properly. Nothing would be a greater failure than if the women’s movement of our times, Me Too, committed the same error.