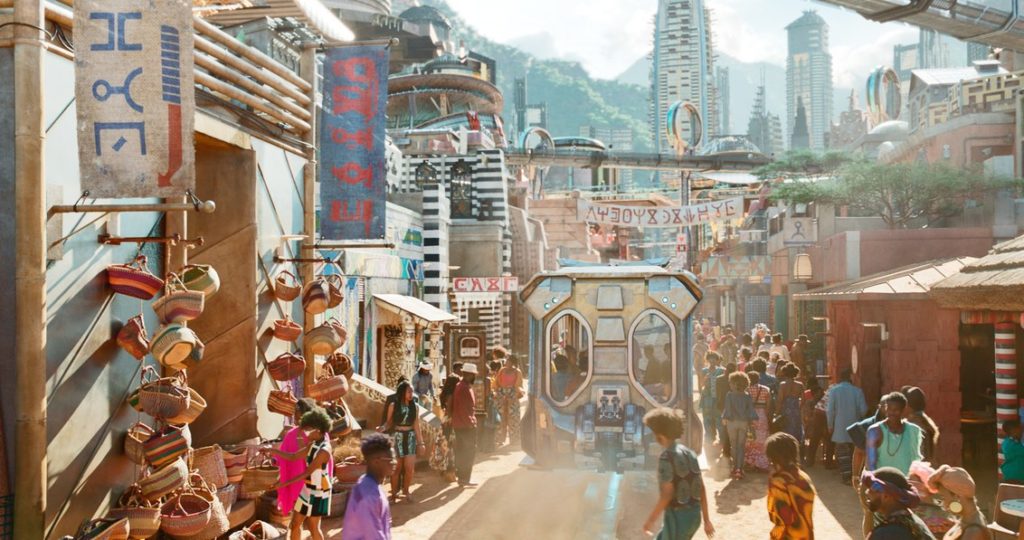 This article contains spoilers, so proceed at your own risk!

Since you are still reading, I assume that you have watched Black Panther and I can therefore share some of my thoughts with you. Let me start by saying that I enjoyed the film a lot – I especially loved the storytelling, the acting, the music (although I would have preferred a Sons of Kemet, Sun Ra, Ibaaku, Willow Smith, Burna Boy vibe), the mythopoetic visuals whose vibrations entice the mind and soul, the elements of Africa; its colourfulness, spirituality, mysticism, philosophy, beauty, not to mention a protofeminism and gender mutuality that is associated with African history more than any other continent’s. In fact, many of the moods in the fictional nation of Wakanda where Black Panther is from didn’t even feel “that” distant to me. For example, the scenes when the characters T’Challa and Nakia are walking through the markets evoked familiar scenes from my life. Or take the rituals and clothing of the royal family, which reminded me of my recent visit His Royal Majesty, the Ooni of Ife’s, palace. My day to day life in Lagos consists of sunsets, ancestral legacy, rituals, architecture and nature that felt reminiscent to Wakanda’s.

But across the African continent, there is another scene which is also rampant – the scene of poverty; of masses of people living under conditions that are unimaginably hostile to well-being. Poverty is as much of a feature of African life as its divine beauty, colourful environment and natural wealth is, but it is a feature of Africa that is invisible in Wakanda.

Of course, there are valid reasons for the erasure of poverty in Wakanda. First of all, it is a fantasy world and who the hell wants poverty in their utopia. Secondly, considering that the leading cause of destitution in Africa is foreign exploitation of its resources, since that doesn’t happen in Wakanda = no poverty. In addition, Black Panther is a movie that belongs to the Afrofuturism canon, and one of the central projects of Afrofuturism is challenging clichés about misery in Africa so it may seem counterintuitive to suggest that the film should have shown the suffering that poverty causes in the continent.

But it should have. Figuratively, at least. Failing to depict the impoverishment of Africa as a key obstacle to Black Excellence is a deficiency to the otherwise strong narrative. I understand that the movie is about escapism, but there are creative ways the topic could have been approached. This is not speculation, by the way. Black Panther does after all unapologetically address a number of other obstacles to Black Excellence such as racism, colonialism, ethnic rivalry, and slavery without becoming too “heavy”. To be clear, Africa is a rich continent in itself, but widespread poverty is the most pressing issue it faces. It was a lost opportunity to include the eradication of poverty in Africa as a major aim of the Afrofuturist polemic.

Much of Afrofuturism today centres  on aesthetics; on mystical, ethereal, cyborg, metallic, goddess-y, ritualistic, spiritual, cosmic afrocentric, astro black, you name it, expression. Google-image “afrofuturism” to get an idea of what I mean. It’s an inspiring, enchanting and political aesthetic no doubt, but to prep for an elevated future there’s a need for deeper engagement with issues such as poverty as well as… climate change, education, the elimination of hyper capitalism and consumption, internet freedom, social responsibility, to name some other issues that are largely missing from these discussions.

The invisibility of poverty in Black Panther’s Wakanda also has a lot to do with differences between black people in the diaspora and those in the continent. In the diaspora, where the film was conceived, empowerment and resistance work focuses largely on racial identity whereas I’d argue that no thoughtful empowerment/resistance project in the continent can ignore poverty reduction. While these distinctions often intersect – black people everywhere are affected by both racial and financial oppression – as someone with a foot in both the diaspora and continent, I find that there is nevertheless a palpable difference in the discussions about major obstacles to prosperity.

As I said in the beginning of this blog, watching Black Panther was definitely a powerful experience for me. I left the movie theatre on cloud nine. It is precisely because seeing unmitigated Blackness on the big screen means so much to me, that I find it necessary to raise questions that we can learn from. We must never underestimate the role of art. Art is a way to understand and change conditions just as much as science or theory is. (If not more.) Science-fiction has a great role to play in creating an Africa without poverty.

That said, while we can and should imagine our way to real life solutions, we should also build paths between fantasy and reality. Movies like Black Panther are potentially rich source of ideas that can lead to actual changes. Unfortunately, this time around, there was little that encouraged us to take the particular issue of poverty to heart.