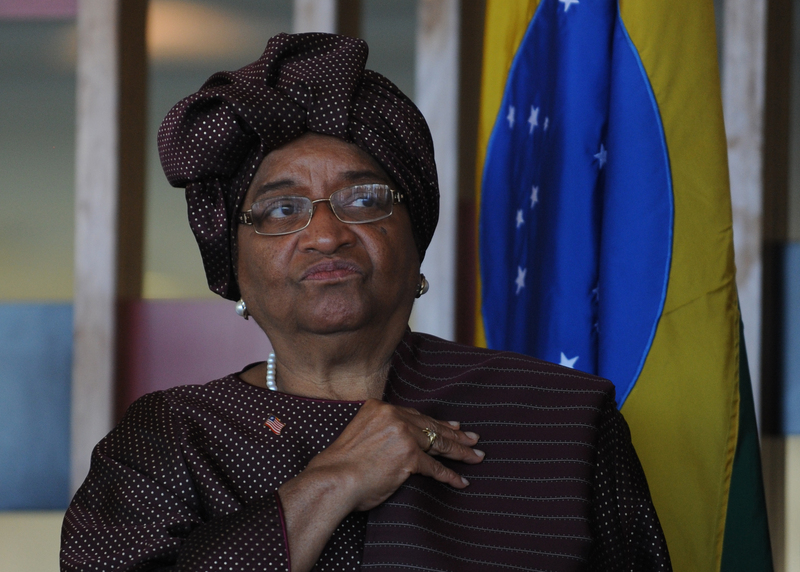 In the guest post below, Robtel Neajai Pailey and Korto Reeves Williams argue that Africa’s first female president, Ellen Johnson Sirleaf, has done little for the African feminist agenda. It is a convincing argument and I am delighted to share it on MsAfropolitan especially because if there is one space where African feminists cannot afford to coddle with the status quo, it is female leadership.

In a public statement in August, Liberian President Ellen Johnson Sirleaf – Africa’s first woman elected head of state – vowed to campaign actively for female candidates running in presidential and legislative elections in October. While her pronouncement may appear praiseworthy, it is too little, too late.

In this year’s high-stakes elections – the country’s third since the end of a devastating 14-year armed conflict – only 163 out of 1,026 (16 percent) approved candidates are women, including one running for president in a crowded field of over 20 men. This represents only a marginal increase since 2005 and 2011, when women accounted for 14 percent (110/762) and 11 percent (104/909) of candidates, respectively.

During a meeting with 152 female contenders, Sirleaf lamented the abysmally low number of women in elected office. In 2005 when she triumphed over footballer-turned-politician George Weah in a duel for the presidency, only 13 women were elected to the national legislature. That number dropped to eight in 2011, when the president secured a second mandate to lead Liberia. There is a strong likelihood that fewer women will win seats come October 10.

This is as much Sirleaf’s doing as it is a reflection of Liberia’s acutely patriarchal political system. In the past 12 years, she has done next to nothing to position women favourably to win votes.

In 2009, when female politicians petitioned Sirleaf to support a woman in her party during a by-election to replace a deceased female senator, she campaigned instead for a man (the candidate Sirleaf supported eventually lost to a woman from the opposition).

Though a 2014 elections law amendment encourages political parties to increase their representation of women in leadership roles, Sirleaf’s own Unity Party ranks below smaller, less-prominent parties in fronting female candidates this year.

This is in part due to Sirleaf’s lukewarm response to a gender equity in politics bill similar to the ones that propelled women in Rwanda, Senegal and South Africa to high public office. When in 2010 the Liberian women’s legislative caucus sponsored an act mandating that women occupy at least 30 percent of political party leadership with a trust fund established to finance their electoral campaigns, Sirleaf did not actively support the proposed law and it was never ratified. When a less radical bill allotting five seats for women in special legislative constituencies was rejected as “unconstitutional” by largely male legislators this year, Sirleaf remained conspicuously silent.

In high-level political appointments, Sirleaf has also failed women. Although she hired a few female technocrats for executive positions in previous years, only four of her 21 cabinet officials are women, with the strategic ministries of finance, public works, education and commerce led by relatively inexperienced and underqualified men.

Despite these glaring missteps, much has been touted about Sirleaf’s crusade for women’s empowerment before and after assuming the presidency, with a Nobel Peace Prize win in 2011 serving as the ultimate stamp of approval.

Sirleaf’s cheerleaders may have some, but not complete, cause to celebrate. Her administration has built or renovated hundreds of markets across the country for thousands of female informal traders called “market women” – the Liberian president’s largest voting constituency.

Sirleaf has also instituted policies to protect women and girls from male aggression – including the implementation of the most comprehensive anti-rape law in Africa, with the establishment of a fast-track special court to deal specifically with gender-based violence.

Despite the existence of the court, however, there remain gaps in access to justice for Liberian women and girls, including the lack of viable forensic facilities. Liberian authorities’ recent failure to swiftly investigate and prosecute the alleged rape of a 13-year-old girl by a sitting member of the national legislature is a clear example of the Sirleaf administration’s inability to address sexual violence. Liberia’s dual legal system – customary and statutory – has also presented significant challenges in implementing the rape law. Furthermore, a decade after the court was set up to expedite gender-based violence cases, it remains in the capital, Monrovia, and inaccessible to most women across the country.

Moreover, the person nominated by Sirleaf in May and approved by the legislator to head the court, Serena Garlawolu, has gone on record endorsing female genital mutilation(FGM), saying the practice “is not a violation of anyone’s rights culturally”. Liberian women’s rights activists petitioned to criminalise the harmful procedure, but the proposed ban was omitted from a recently passed Domestic Violence Act.

While Sirleaf’s record on socioeconomic empowerment of women remains contested, her record on enhancing the political stature of Liberian women is woefully inadequate. Her brand of femocracy – a term coined by Nigerian feminist scholar Amina Mama – has severely stifled women’s political participation.

Mama makes an important distinction between feminism and femocracy, arguing that while feminism attempts to shatter the political glass ceiling, femocracy deliberately keeps it intact. Her 1995 preoccupation with African first ladies as femocrats remains relevant now that Africa can boast of women presidents, including Sirleaf and former Malawian head of state Joyce Banda.

The over-glorification of Sirleaf as a feminist icon is particularly troubling since her 12-year presidency has actually served the interests of a small, elite group of women and men in politics and thus upheld long-standing patriarchal norms (pdf) in Liberia. This is particularly evident in Sirleaf’s defence of nepotism (she has appointed three of her sons to top government positions), failure in fighting corruption and continuous recycling of mostly male government officials. Other development challenges which have intersectional feminist linkages to women’s abilities to participate fully in politics at community and national levels have either been compromised or ignored, including the right to education for young women and girls free of sexual coercion and exploitation.

Having recently gone on record rejecting feminism as “extremism“, Sirleaf has publicly distanced herself from the very movement that got her elected in the first place. In her 2005 campaign, Sirleaf aggressively evoked her gender as an alternative to the previous throng of authoritarian and brutal male leaders. Twelve years later, the euphoria of electing Liberia’s first female head of state – twice – has completely lost its lustre.

Sirleaf and others like her have demonstrated that a woman’s assumption of the highest political office in a country does not inevitably result in gender equity. Her legacy on women’s political participation, in particular, is characterised by an individualistic approach that betrays the hard-fought gains made by women’s rights movements across the globe.

Though the international media machinery continues to hoist Sirleaf up as the matron of women’s rights, she is far less deserving of this title. That Liberia currently has no viable female presidential candidate is a glaring indictment of her two terms in office.

In a recent presidential debate, four male candidates presented very concerning responses to questions about how they would address gender-based violence in Liberia. If the first female president in Africa was not able to resolve this quagmire, we have little confidence that the bevy of men vying for the presidency will succeed.

If the current political landscape in Liberia is any indication of future trends, it may well be a century before we elect a female (or male) head of state who is truly committed to a feminist agenda.

Robtel Neajai Pailey is a Liberian academic, activist and author of the anti-corruption children’s book Gbagba.

Korto Reeves Williams is a Liberian feminist and a strategic civil society leader in Liberia and the sub-region.

This commentary was originally published in Al Jazeera English.