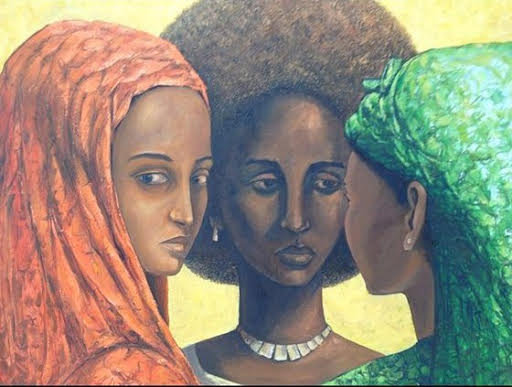 In in my teens, I vowed to abstain from sex, in solidarity with my mother.

As a young boy living in a Sudanese refugee camp, I first found out that, although physical love was important for my mother, patriarchy made it impossible for her to experience outside of marriage, a marriage she didn’t want since she decided to dedicate her life only to us, her three children, after the death of our father.

In the camp, my mother braided hair for a living. Then, she left for Saudi Arabia to work as a domestic servant, leaving me and my two siblings with our grandmother. I was not 4 yet. And so her face began to fade from my memory with the passage of time. It was then a delight to receive a picture she sent us from Jeddah years later. We hung the framed coloured photo of my mother sitting on a chair, as high as her cheekbones, on the mud wall of our hut.

Visitors marvelled at her beauty. The women amongst them remarked how sad it was that she didn’t want to remarry and that a man would not have made a similar sacrifice. “But a woman can live without love,” said one. “Yes, but she shouldn’t live without it,” protested another.

These women debating my mother’s love life were our neighbours. Although married, most had their husbands working away from the camp. And they in turn, understood the absence of love in all its dimensions from my mother’s life.

Being a silent child, my presence went unnoticed as I sat around them and they talked about all subjects openly. From them, I learnt about sex, noting its absence in their lives rather than any fulfilment.

I also registered the unfairness of society, that while these women were forced to entrap their desires, men pursued causal relationships outside of marriage, knowing that their wives wouldn’t reciprocate because society would police them back home. I discovered how tradition was the chain that enslaved these African women while giving men free rein. I detested it. I longed for its destruction.

But I also saw that when desire is forced to remain inside, migrating deeper into the soul, one’s bones begin to dance. Dancing, I’d gather, was the first step to freedom. And I took a lifetime lesson from the ways these women expressed love even when caged. Their sensuality was like a well from which I drank endlessly. With them, love whispered its tender side rather than pronouncing itself loudly. I could see it in the way they talked when men they liked visited, how passion masked their faces like make-up. I saw it in the way they varnished their nails, kholed their eyes, gathered their hair into buns before they retreated into the open-roof showers under the camp’s moon and the stars.

The way they embraced their desires silently spoke of bloodless revolution to me. That society could keep men away from them, but they would not stop feeling.

But now and then, their emotions burst into the open. The consequences were severe. I remember what happened when one of our neighbours, the wife of a renowned playboy, was overheard talking about a man in her sleep. And then she fell sick. It was assumed she was possessed by that man. The stranger had a name: jinni. And he had to be exorcised. Through the window of the woman’s hut, her daughter and I watched as she was beaten up by male elders, calling on the evil spirit to leave her. She was fed dung. “Leave me,” she screamed at the man inside her, while the men around her thumped her as though she was a punching bag. “Leave me.”

But I am convinced, from the way I heard her describe the man she had encountered on her way to the market, that she was in love. This man wasn’t a jinn. He was a young man whose beauty possessed her heart. But because of fear for herself and her daughter in a community run by men, the married woman, with a husband fornicating in a foreign land, accepted the tired story of a jinn, as though a woman couldn’t yearn for a man’s body, in the way men did for women. Society muted her lust by day and now also by night. She would never dream again. A lesson to her daughter, all other girls, and to me.

And so by the time my mother had returned to the camp for a visit, many years after she’d left, my eyes were trained on the subtlety of women’s love expressed in an oppressive society.

One morning, a few days after her return, I went with my mother to the market. When we arrived at a stall of a handsome man our family knew, her face lit up. I remembered overhearing what one women said about my mother: “No man has touched her since her husband died, even if that’s what she would dearly want.” I could see thoughts promenading in my mother’s wide eyes. I had seen enough to know she was attracted to that man. As he was to her. But I knew that if both chose to express their feelings, only one of them would suffer.

So later that night, as we went to bed, I chose to sleep beside her, praying that my mother would not utter that man’s name in her dream, wake up feverish with love. I didn’t want her to get beaten up or fed dung. I didn’t want her body bruised for carrying amorous feelings. So, I threw my arms around her and held her tight, as if to remind her of her responsibility that made her decide in the first place to give up love for us. My hand rested on her chest.

Perhaps it was then, as her heart thumped against the palm of my hand, while becoming incensed by the injustices of men loving freely while women, like my mother, had passion rotting inside them, perhaps it was then that I developed an ambivalent relationship with sex. If my mother didn’t enjoy it in her life, I saw no reason why I, for whom she sacrificed everything, should.

Sulaiman S.M.Y. Addonia is British, born in Eritrea to an Eritrean mother and an Ethiopian father. His first novel, THE CONSEQUENCES OF LOVE, was shortlisted for the Commonwealth Writers’ Prize and has been translated into more than 20 languages. He currently lives in Brussels and has just finished his second novel.