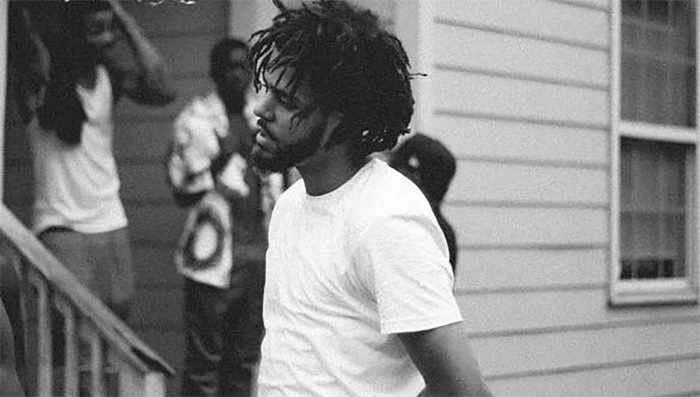 In 1985, the same year that the artist J Cole was born, feminism was on the other hand, dying. The radical change in sexual roles that had marked feminism in the 1970s was replaced by a rapprochement of traditional relations through the early 1980s. Rather than challenging gender norms, women were returning to girlishness and men to machoism.

The hyper-femininity which replaced the stridence of the previous decade was evident in popular culture of 1985. You had Madonna singing “Crazy For You” in a desperate tone, Whitney Houston was “Saving All Her Love For You” (“though she tried-to-resist-being-last-on-your-list”) and Bonnie Tyler was “Holding Out For A Hero” (the definition of which, if the video is to go by, is a perv who quite possibly may electrocute you). In film, while Alice Walker faced a sexist backlash for The Colour Purple, Ally Sheedy became conventionally girlie-girlie to get the guy in “The Breakfast Club”. 1985 saw more He-Men than ever before – Rambo, Commando, Rocky, Matt Hunter, Sherlock Holmes, I could go on and on, even Santa Claus got the God-treatment.

I’m not suggesting that the 1970s were absent of ballads or, for that matter, that feminism ceased to exist entirely in the 1980s. To give just one example, it was a key decade for women’s grassroots organising especially outside of the west. But in global popular culture, the 1980s were about the male gaze, male authority and patriarchal fraternity.

As far as gender equality is concerned, things did not get much better pop culture-wise in the 1990s or 2000s when our rising star, Jermaine Cole, would come of age. Sure, there were feminist(ish) interventions such as Thelma & Louise, Basic Instinct, Erin Brokovich and of course, Sex & the City, as well as hits from TLC and Destiny’s Child. But it was not until the 2010s when icons like John Legend said that all men should be feminists, Beyoncé declared that she was a modern-day feminist and Gloria Steinem was awarded the highest civilian honour by president Obama, that an unmitigated feminist presence comparable to that of the 1970s emerged again.

It was against these cultural settings that, in 2010, J Cole signed with Roc Nation and subsequently went double platinum (with no features). While the racial conditions which have impacted his life have always been evident in his work, the undulation of cultural attitudes about gender into which J Cole was born and raised are more subtle.

Yet especially in his recent album, “4 Your Eyez Only”, the impact is clear. In “Foldin Clothes”, for example, Cole expresses his love for a woman by taking on domestic tasks and, if I might add, that never did I imagine that the visual image of Cole folding clothes could be so pleasing. He also talks about how good it feels to do the right- instead of the wrong thing. In “She’s Mine” he rhymes about feeling vulnerable while falling in love for the first time. Did I mention that I have fantasies of J Cole folding my clothes?

Returning to the analysis then (I will, I can). While the portrayal of masculinity in “4 Your Eyez Only” is unusually open and tender for hiphop, a feat it owes to the emotionally authentic discussions about masculinity that feminism has encouraged, it nevertheless does not engage with feminism to the critical extent where misogynist lyrics are absent. As in his previous album, you still sense that women can be neatly divided into “sisters” and “hoes”.

Nor is it a masculinity that is worried about the fate of black women much. J Cole’s world is one in which racism and police brutality happens to black men alone. It is almost mythomaniac in this narrative –  as though men suffer more from racism than women when, if anything, in a white male supremacist society, at least patriarchy offers black men a significant level of power.

Nevertheless, the expression of masculinity in the album raises multiple observations. For instance, if patriarchal culture defines masculinity as tough, strong, self-reliant, unemotional, domineering, virile and sex-driven, then black men have become these things more than other men because they have much more to loose in not being what men are intended to be.

This is the reason black men cause envy in men of other races – they’ve perfected masculine ideals like they invented them. Yet if anyone knows how damaging the conventional idea of masculinity is, it is the black man. As Cole puts it himself,

Niggas from the hood is the best actors / We the ones that gotta wear our face backwards / Put your frown on before they think you’re soft / Never smile long or take your defence off / Acting tough so much we start to feel hard.

Inimically, it is a masculinity that remains reluctant, if not stubbornly defiant, to take feminism and the experiences of black women seriously. And yet, insofar that the album offers an alternative world through which black men can approach discussions about compassion, kindness and decency toward themselves and others, “4 Your Eyez Only” is not only an album to play on repeat, it is also one that does not provoke my feminist spirit to complete despair.