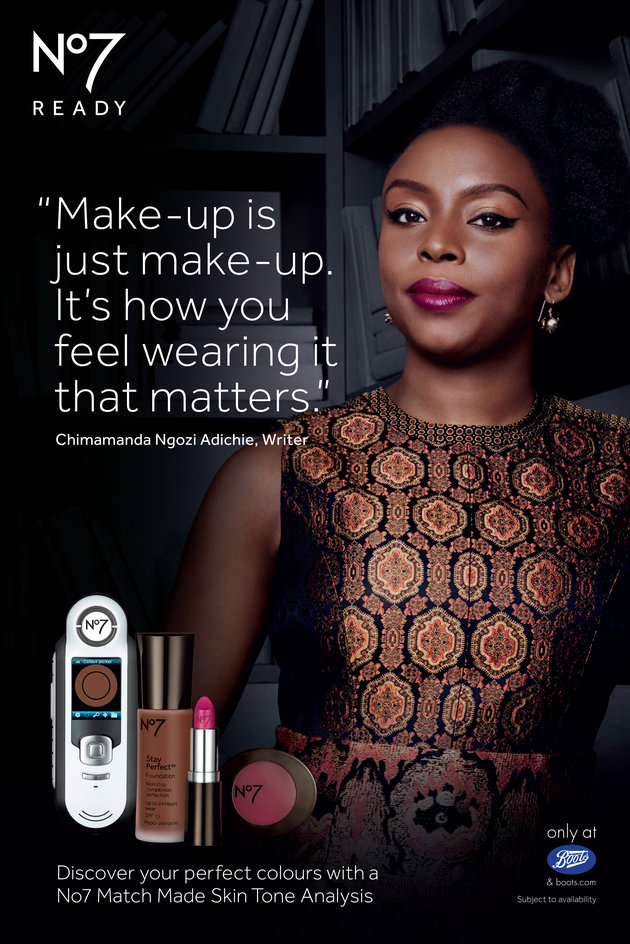 I once asked in a blogpost, “why is that feminism, one of the largest (in outreach, numbers and impact) socially transformative movements that we know of barely exists in mainstream narrative? […] Whatever one makes of feminism, to not acknowledge its existence in cultural production seems curious.”

That was then. Nowadays, feminism can be found EVERYWHERE from global institutions such as the UN to Iron Man to Kim Kardashian’s pornographic selfies. It’s all good that the term is in the mainstream, but it doesn’t mean that we should throw away common sense while celebrating its newfound popularity and allow corporates to become the spokespeople of the movement.

A recent example of a corporate, hardly feminist brand coopting the ideological message to sell their products via deceptive emotional marketing is the No7 “Ready to speak up” campaign, which features Chimamanda Ngozi Adichie, who of course is a brilliant spokesperson of feminism.

My latest Guardian Nigeria column tackles this. See below.

Last Friday, the Boots pharmacy brand, No7, launched a new beauty campaign featuring world renowned author and feminist advocate, Chimamanda Ngozi Adichie. Titled “Ready To Speak Up”; the print, TV and online campaign propose that when a woman wears the right makeup she can speak up for what she wants.

The first banner ad features an attractive and confident looking Adichie posing behind copy that reads “Make-up is just make-up. It’s how you feel wearing it that matters.”

Let’s look at the first part of the copy – makeup is just makeup. I understand the sentiment behind it, objectively speaking. But makeup is hardly just makeup. Just like a book is not just a book or fashion is not just fashion. It has context, purpose and symbolic meaning – both negative and positive. I’d describe makeup as the primary kit of an aesthetic culture where cosmetic alteration is used to express and modify self-presentation and/or feelings of self-appreciation.

The second half of the copy which states “It’s how you feel wearing it that matters” makes a relevant point. A woman can look good in makeup but still have low self-esteem, while another can wear makeup in a way that boosts her already existing confidence. But if self-esteem were really of importance to No7, then it would have been more relevant to ask how a woman feels when “not” wearing makeup. Alas, such a question would not sell No7 products.

As a makeup wearer myself, I especially enjoy the way that beauty products tickle my senses with colours, textures and scents. However, I am in no denial that my makeup choices are also informed by ideas of womanhood. Ideas, that judge women on their appearances in different, far more demanding, ways than men. In short, my wearing makeup has nothing to do with my being “ready to speak up”, which I need no makeup to do, but a lot to do with being “ready to look good” in a way that appeals to me.

Furthermore, it’s a complex relationship that was established already in my childhood: as a little girl, I loved Barbie dolls, make up dolls, paper dolls, you-name it-dolls. Admittedly, I dressed my favourite Barbie doll – the one that represented my inner self (if I may be Freudian) – in black from head to toe and drew tattoos on her. I cut her long black hair short and painstakingly painted red lips and pointy cat eyes on her.

But even if my preferred makeup was not stereotypically “feminine”, it was symbolic of a cultural upbringing where a significant part of femininity was about appearance.