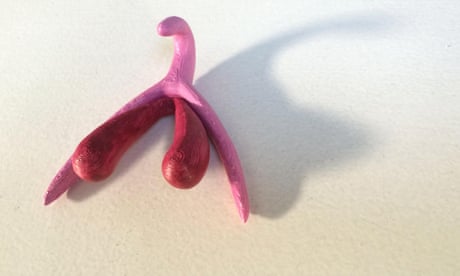 Reposting my latest comment for The UK Guardian, which was there titled “This is a 3D model of a clitoris – and the start of a sexual revolution”. The article has generated a lot of discussion and many questions, including enquiries where to gain further understanding of the clitoris’s relation to the vulva. This discussion is overdue in the mainstream.

I especially recommend the following links for further reading.

Also look up the links in the article. And – if you can bear to sieve through some misogyny and trolling – the comments section in the original article is quite interesting too.

This month, pupils across France will be able to use the first full-size anatomical model of a clitoris in their sex education classes. Considering all the technological, medical and scientific achievements humans have made, this seems to have taken a long time. The distribution of this model has been possible due to 3D printing technology; but even three-dimensional MRI scans, which previously produced the most accurate representations of the clitoris, only became available in 2009.

But it was worth the wait. The truth is, you might struggle to gain pleasure from a tool you don’t even know you have. In 2016, women finally know without speculation what the whole of their sexual organ looks like; and for many it won’t be quite what they imagined.

You may be wondering, what’s the big deal? Is the clitoris not the “small, sensitive, erectile part of the female genitals at the anterior end of the vulva”, asOxford Dictionaries defines it? And isn’t the real issue simply whether it brings a woman sexual gratification?

Well, decide for yourself. The popular opinion seems to be that the 3D printed clitoris resembles a wishbone. To my eyes, it also (fittingly) resembles a fleur-de-lys, or, to use a more contemporary example, a tulip emoji.

But the important thing is that it debunks myths that have repressed female sexuality for centuries. For one, it refutes the dictionary/textbook education that wrongly asserts the clitoris is the size of “a fingertip”, a “pea” or that it is small. We can now clearly see that the clitoris includes two shafts (crura) which are actually about 10cm long. Not only can we visualise that the clitoris is more than what the eye perceives; with the visual model we can also now get a mental image of how it encircles the vagina, making penetrative sex potentially orgasmic. This means that a demystified discussion about the female orgasm is possible at long last.

Moreover, with the 3D model, the uninformed ways that women’s bodies are represented, whether through sex education, pop culture or pornography, now just seem silly. Another popular notion now proved to be false is that the vagina, rather than the clitoris, is the female equivalent of the penis.

I don’t mean to convey that clitoral anatomy has been obscure to everyone until now. Feminists have been insisting that there was a lot more to the clitoris than popularly believed – especially since urologist Helen O’Toole mapped it out in 1998. Nonetheless, imagine a world where it is common knowledge what a woman’s primary anatomically sexual organ looks like. Imagine how sexually empowered women who can visualise their clits will be.

Imagine too how confident men can be when freed from the epidemic deception that satisfying a woman is like winning in the lottery. And lastly, imagine being able to respond to inquisitive children who want to know why Jane’s and John’s genitals are different, with a logical and factual answer – that a clitoris is like an internal penis and a penis like an external clitoris.

Well, thanks to the 3D model, such a world is not only possible but also unpreventable. In fact, though 3D printing has been heralded as a third industrial revolution, it’s set to usher – thank you – a sexual revolution too.—