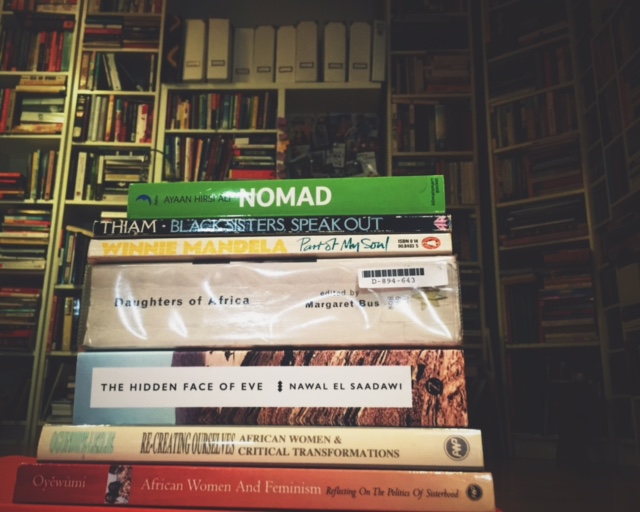 African feminists, that is African women who are feminists, should not only read books by other African women. From my Afropolitan point of view, our reading should be cosmopolitan, we should enjoy books about all kinds of topics from anywhere in the cosmos. That is how you expand your mind, and not by repeatedly reading one genre.

However, if these two things are true about your identity, 1) you are a woman, and 2) you are of African heritage, then chances are that no other books that will have that special, sweet semblance in your heart as books written by African heritage women. They’re like nothing else in this world.

In that vein, I’ve listed seven classic African feminist non-fiction books that make African women ooh-aah because they’re so meee, or youuu. The list could be much longer, naturally. But these are books that have shaped, and changed, my worldview and which I recommend both to young and veteran African feminists.

1. Molara Ogundipe Leslie – Re-Creating Ourselves This is my favourite of the classic African feminist non-fiction literature. If I had to pick, that is, which luckily I do not. Frankly, “Re-Creating Ourselves” is not perfectly written, at times Ogundipe-Leslie’s energy about a topic seems to fizz out toward the end of a chapter. Also, and relatedly, the book could be edited better. But Ogundipe-Leslie, like her peer, bell hooks, is a woman of ideas and that is my kind of woman.

2. Oyeronke Oyewumi – The Invention of Women: Making An African Sense of Western Gender Discourses. Speaking of ideas, here’s one to chew on. Oyewumi argues – in a nutshell – that gender does not exist in an African context. Definitions of man- and womanhood in Africa are not necessarily gendered and nor are they automatically the primary way of signifying relationships of power. Instead, she argues, in many African societies each individual occupies multiple intersecting positions, with varying relationships to privilege and disadvantage. Although I do not agree with Oyewumi’s thesis (Bibi-Bakare Yusuf’s riposte is fantastic), this book is a must-read. What appeals to me about the book, then, is the challenge it poses to Eurocentrism in knowledge production. Also, the book is utopian, I read it as what society could be rather than what it actually was. (Sorry, the wrong book of Oyewumi’s is pictured.) (That one is great too.)

3. Awa Thiam – Black Sisters Speak Out. “Black women have been silent for too long.” So begins “Black Sisters, Speak Out” aptly. Have you read Mariama Bâ’s novel “So Long  A Letter”? One could argue that Thiam’s book is the non-fiction version of it. Here we have the real stories of women in polygamous marriages. Of women who have undergone female genital mutilation. Of women, whom Thiam argues are “the last great colony in the world.” By the way, you might be interested in a talk I gave in honour of “So Long A Letter”.

4. Nawal El Saadawi – The Many Faces of Eve. Some of the essays in this book will feel quite specific to African women of Arab descent. However, like Thiam, El Saadawi writes fearlessly about the violence that takes place toward women in the name of religion, tradition and culture. If you haven’t read El Saadawi you have missed out on one of the sharpest, most compassionate and original thinkers alive. This book displays all of those qualities.

5. Ayaan Hirsi Ali – Nomad.  The woman everyone loves to hate. In times when islamophobia and racism continue to negatively affect people’s lives in Europe, Hirsi Ali’s writing provides ammunition for the far-right and conservative groups, which understandably makes her seem wicked to those at the receiving end of the shots. Yet her story is a harrowing account of the astronomic devastation religious “morals” can have on a woman’s life. She writes freely, coldly at times, but nothing in this book is banal. It should be read.

6. Margaret Busby – Daughters of Africa: An International Anthology of Words and Writing by Women of African Descent. Did I already mention that I had a favourite of the seven books listed? Can I take it back? Please? Truly, they are all fantastic. But this book is a must on the book shelf of every African feminist. I’m not going to say anything else.

7. Winnie Mandela – Part Of My Soul. For insight into the life of one of the most revolutionary, African female figures of our times, this semi-autobiographical book is a must read. Winnie has achieved more for Africans, female and male; and for women, of all ethnicities, than others could dream of. Her life is one full of sacrifices, personal and political, and yet one gets the sense that if she were to choose, she would do it all over again. Through the collection of conversations, letters, supplementary speeches and anecdotes, it becomes clear exactly how much in debt we are to her.

Have you read any of these? And yes please feel free to share your own African feminist non-fiction favourites in the comments.