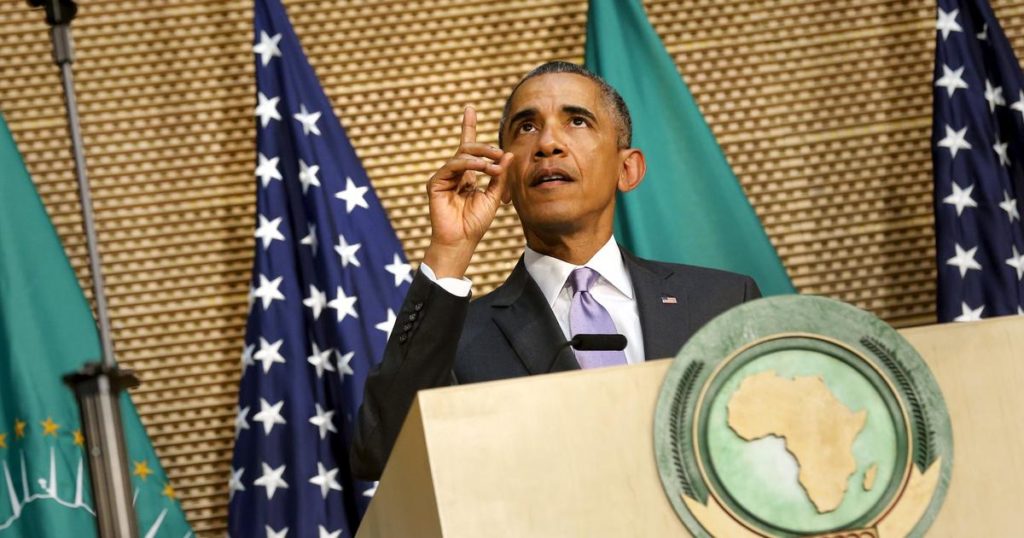 In his sales pitch aka his “address to the African Union” last week, US president Barack Obama gave Africans a worse deal than Amazon.com, Inc. gives book publishers on any given day.

Obama’s pitch was pally, persuasive and punchy as any skilled salesperson’s. Terms like ‘partnership’, ‘development’, ‘co-operation’ and ‘opportunity’ were abundantly used. But make no mistake, its intention was to mask dubious policy in soundbites.

Yet Obama’s insincerity is not the point for Africans. At least it should not be. Sure, the US president is “one of our own” as AU chair, Nkosazana Dlamini-Zuma, put it. We are proud of him for various reasons. But his commitment is not to our own. Rather it is to the empire over which he reigns – the USA – and he left Africa having secured more resources for the empire. (As well as with a fuck you-grin to China on his face.)

Meanwhile, and this is the point, instead of over-analysing Obama’s role, let’s ask what the leaders of the African Union, or African Onion as I call it, are doing? Here’s what. They are proceeding to mindlessly sign so called ‘partnerships’ that are sure to ruin the lives of generations to come. The Onion itself refers to its partnerships as “Win-Win”. However, you don’t have to be on an expert judge panel to observe that Africans aren’t winning anything but fake trophies.

This is why I call the African Union the African Onion, because the things they do make me weep!

Trade and development partnerships are the modern-day version of England’s indirect rule, a continuation of a painfully dark history of exploitation. To name only a few, there’s the African Growth and Opportunities Act (AGOA), which Obama mentioned and which considering that it creates 100,000 jobs in the US ought to be called the “American Growth and Opportunities Act”; the New Alliance Cooperation Framework through which African nations legitimise the theft of natural resources to for profit corporations under the aegis of “private sector investment plans”; the “Pan-African initiative”, or PanAf as it deceptively locally sounds, was set up by the EU to improve trade, observe elections, run governance initiatives, yada yada – it just so happens that African states are forced to tie a large portion of their markets to Europe in exchange. There’s also the rather sinisterly named “Trade Africa“, which boosts intra-African trade, not a bad thing per se, but what does the US get in return? Well, how about a million bucks.

We could go on and on and on.

The Onion was established in 2001 when it (largely thanks to Gaddafi) replaced the Organisation of African Unity (OAU). It has since risen to a significant position within international politics. It has become more powerful as a political, economic and military pan-African body. To that measure, I value its work.

However, – and the reason for which I write this post – is precisely the political weight it is gaining and will rapidly loose if we do not monitor it. If we want to keep the Onion relevant, we are going to have to be critical of it. We are going to need to chop off any pungent taste and odour with surgical precision.