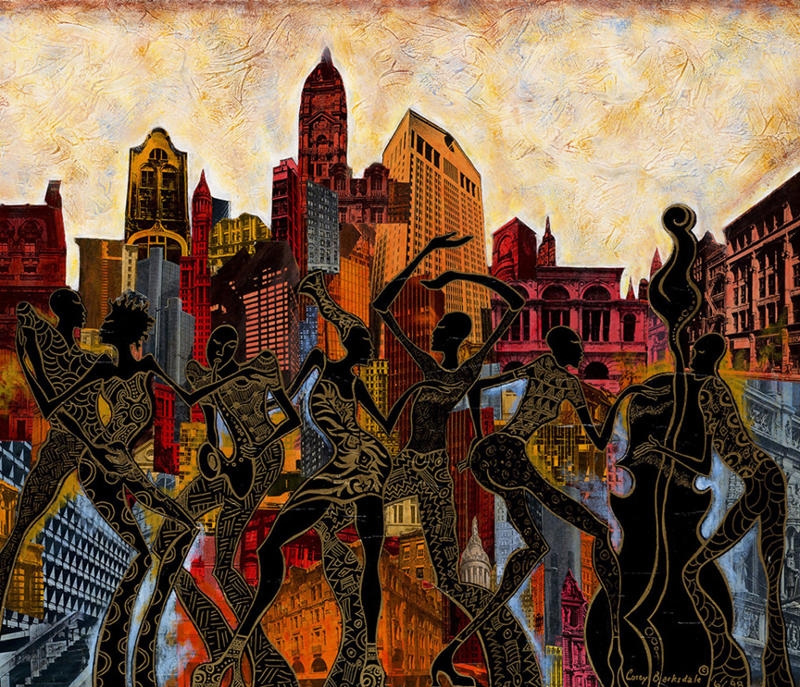 I presented a radio essay “Afropolitanism – the cosmopolitanism that focuses on Africa” for Swedish Radio’s culture and ideas programme, OBS P1. You can listen to my reading here but it is in Swedish. I am sharing a translation below with some edits for clarity.

Cosmopolitanism – the idea that people are both citizens of the world at large as well as of a particular nation, is often accused of being a utopia without anchoring in reality. The cosmopolite is seen to be shallow, elitist and privileged.

Afropolitanism, a version of cosmopolitanism centred on Africa has been a topic of heated discussion in African intellectual circles in recent years, and it faces the same accusations. Critics argue that the Afropolite, as the cosmopolite, belongs to a shallow elite and is therefore unsuited to deal with African realpolitik. Moreover, critics such as the Kenyan writer Binyavanga Wainana, argue that Afropolitanism is dominated by the west, rather than independent-minded, as it indeed should be.

Afropolitanism emphasises that while African citizens are tied together by their history, political structures, cultural values and traditional beliefs, Africans are also global citizens. “We are not citizens of the world, but Africans of the world,” said the Nigerian-Ghanaian writer, Taiye Selasi, when she coined the term roughly ten years ago.

Selasi’s theory is not entirely new. Even though they did not call it Afropolitanism, thinkers such as the African-American sociologist W.E.B Du Bois developed, in essence, an Afropolitanistic theory, namely that societies where people are enriched by one another’s differences are desirable, firstly, and that black people should be at the forefront of developing thinking about such a world with an emphasis on a progressive Africa.

Du Bois also wrote in The Souls of Black Folk, one of the most important books of the twentieth century, from 1903: a vision where he “sits with Shakespeare and he winces not. Across the color-line I move arm in arm with Balzac […] I summon Aristotle and Aurelius and what soul I will, and they come all gracefully with no scorn or condescension.”

The fact that Du Bois’s vision engaged with these particular men could be seen as elitist and west-influenced. His critics, such as the pan-African activist Marcus Garvey indeed pointed out Du Bois’s background in heated discussions that took place at the turn of the century. Du Bois was the first African-American to gain a doctorate from Harvard University, he was a student of the volksgeist in Germany, and he spent his last years living comfortably in Ghana with his wife, the writer Shirley Graham Du Bois.

It is true that Afropolitanism has roots in cosmopolitanism, which in return has roots in the west. But even if conceived in the west, the cosmopolitan idea does not apply to western cities alone. In fact, Africa, with its history of migrations, and home to countries containing hundreds of different ethnicities, has some of the world’s oldest cosmopolitan cities. From historical cities such as Djenne and Timbuktu to modern day Addis Ababa or Lagos, it is not simply the presence of white westerners that makes these cities cosmopolitan but rather the presence – and coexistence – of Africans from other parts of the continent as well as migrants from Asia, the Middle East and elsewhere.

And sure, Afropolitanism can be accused of elitism. But so can engaging with any philosophical questions. Someone trying to escape an oppressive regime or someone who cannot afford to put food on the table, is unlikely to engage with ideas whether we are talking about Afropolitanism, feminism or Marxism.

That is why it is essential that those with the opportunity, do not engage with ideas on the basis of identity politics, but with intellectual curiosity. I’m pointing this out because the main critiques of Afropolitanism have a grounding in identity politics.

In a world where race, gender, sexuality and ethnicity play unjust roles in how a person experiences the world, terms such as racialised, cisgender and ethnic Swedish have made their way from academic anthologies and theoretical discussions into the general debate. People seek ideologies where they can root their identities, as well as their hopes and fears. In such circumstances, cosmopolitanism and subsequently Afropolitanism, which question both psychological as well as physical borders, are less appealing to those seeking more, rather than less anchoring e.g. in one’s gender. To that end, Afropolitanism can seem too slippery. It doesn’t provide a cause to rally around, it does not get outraged or upset about injustices as much as it tries to understand and dissolve them at depth. Compared to ideologies such as feminism, pan-Africanism and nationalism, cosmopolitanism is not tied to identity but it insists on a global worldview.

I do not mean to suggest that cosmopolitanism, the idea that people are world citizens, is more relevant than feminism or pan-Africanism, for example. Also, I am not saying that identity politics do not highlight injustices that ought to be exposed. Hardly.

If anything, my point is that feminism and pan Africanism should focus on more than injustices towards the individual’s identity, as it is easily reduced to today, and keep focus on broader questions in order to tackle them. Even if our existence is deeply racialised, gendered and ethnified, it is important that we clarify – above all for ourselves – that we are more than the abstract labels that are forced upon us. We are more than our race, gender, ethnicity, religion and nationality. I am a black woman. I am Yoruba, I am Nigerian and Finnish. I belong to the middle class. But when I look at myself I see Minna Salami and not any of these labels.

Africa’s social, political and economic future is unstable. The continent both needs the west as well as it needs to free itself from the west. African resources continue to enrich other continents, especially Europe, to the detriment of Africans themselves. Colonisation may be over but in practice it has simply been repackaged with progressive rhetoric. Take for example the EU’s Joint Africa-EU Strategy (JAER), which claims to be an initiative founded in partnership but which actually ties African countries to damning contracts.

It is pivotal that Africans find a language with which we can critically engage such present situations as well as envision the future with. Such a language should not only be about self-knowledge but about knowledge broadly speaking. One of those languages is Afropolitanism.