Manuela Sambo’s art makes me feel the same way that Yvonne Vera’s novels do. Her pieces make me (longingly) identify with a kind of primal power that women possess but, following centuries of brainwashing, that we are unaccustomed with. Like Vera’s, Sambo’s work seems to be in search of a world of poetic essence, caring deeply about the subjects who unveil this mesmerising world. It is a world of story, character, symbolism, detail, sensuality, motherhood, power and synchretism.

Faces and bodies are frequently the subject of Manuela Sambo’s oil-pastel drawings and paintings. I’m sharing some of them below. In the first pair, “Unity of Soul I” and “Unity of Soul II”, we find a camaraderie between two women that is affectionate if a little spiteful. In part II they are entangled by stems of a sweet, white chrysanthemum as though their togetherness has flowered purity. By contrast, the red background indicates that they are surrounded by danger, or perhaps they create it. 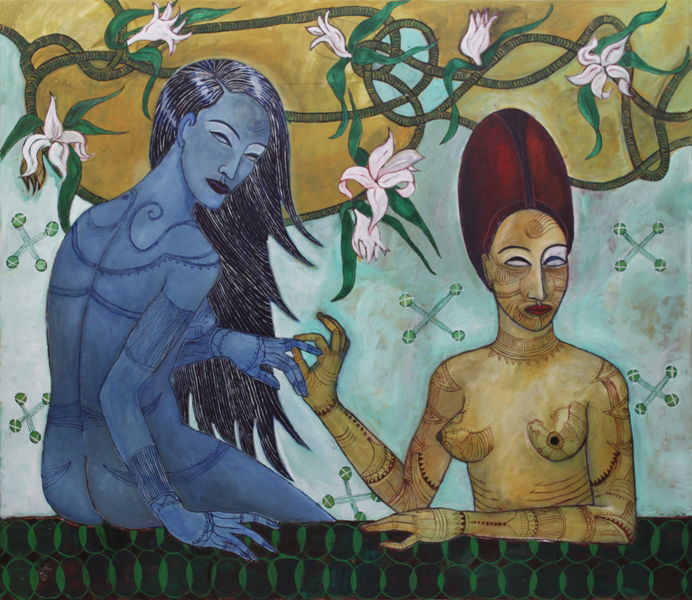 Unity of Soul I, 2012 (after School of Fontainebleau) 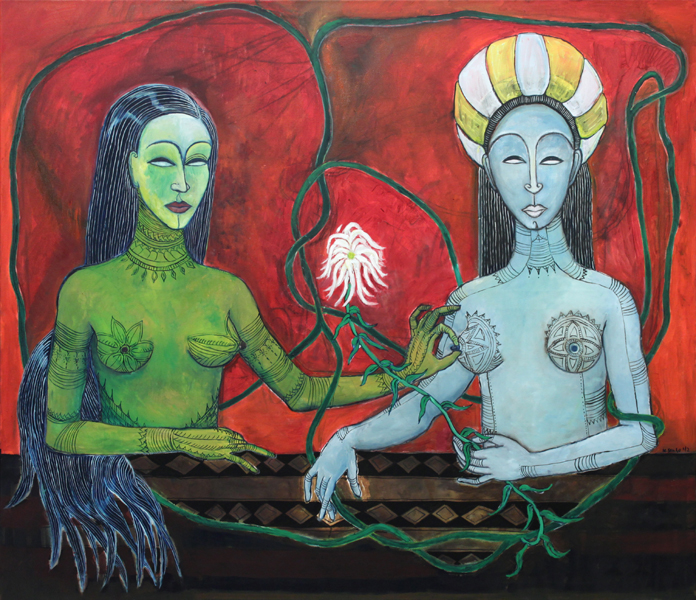 Unity of Soul II, 2012 (after school of Fontainebleau)

In “Changing to Danger” and “Luxuria I and II”, we get a sense of the female and male body interacting. John Berger writes in his extraordinary book Ways of Seeing that in most imagery, “men act and women appear. Men look at women. Women watch themselves being looked at.” Not in Sambo’s images. When a male subject appears in her collection, which they seldom do, there is an attractive tenderness to them. In most art, an erection is symbolic of power and dominance but Sambo’s male subjects are vulnerable despite their arousal. Gender roles are not reversed, however. Actually, what jumps at you is the wholeness that is possible when a man is in tune with his feminine, and a woman with her masculine. 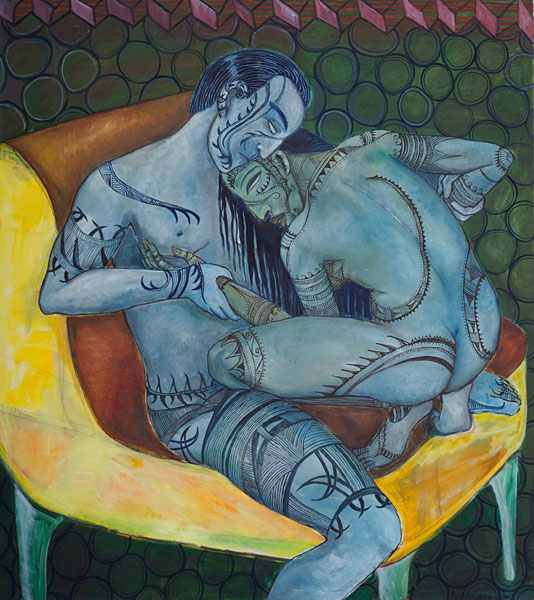 Changing To Danger, 2013 (after a Pompeii fresco) 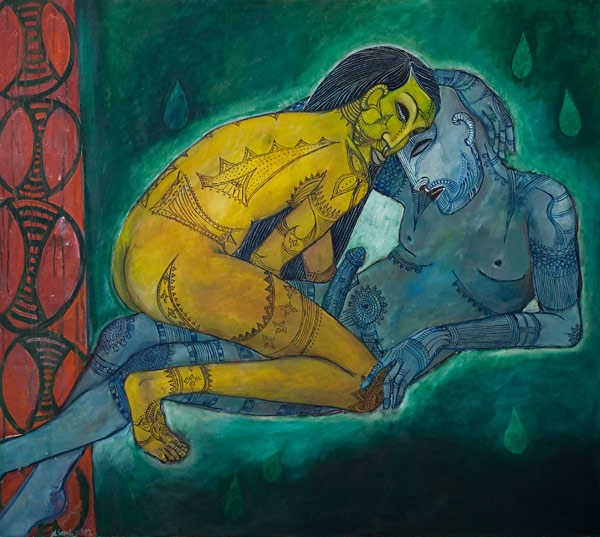 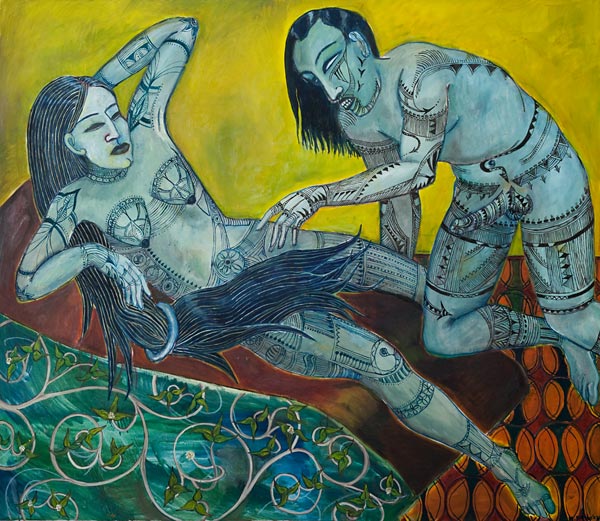 Similarly, unlike the famous “Birth of Venus” by Boticelli (which I find striking too) where Venus is fragile and shy, or Cranach der Ältern’s “Venus” that Sambo refers to and which Berger might argue is “appearing”, Sambo’s “Venus” feels no self-pity about being desirable. She is a femme fatale, defiant like a gazelle. I imagine that she would swiftly attack predators with her flower-weapon whose petals erupt from a thorny stem like shark jaws. 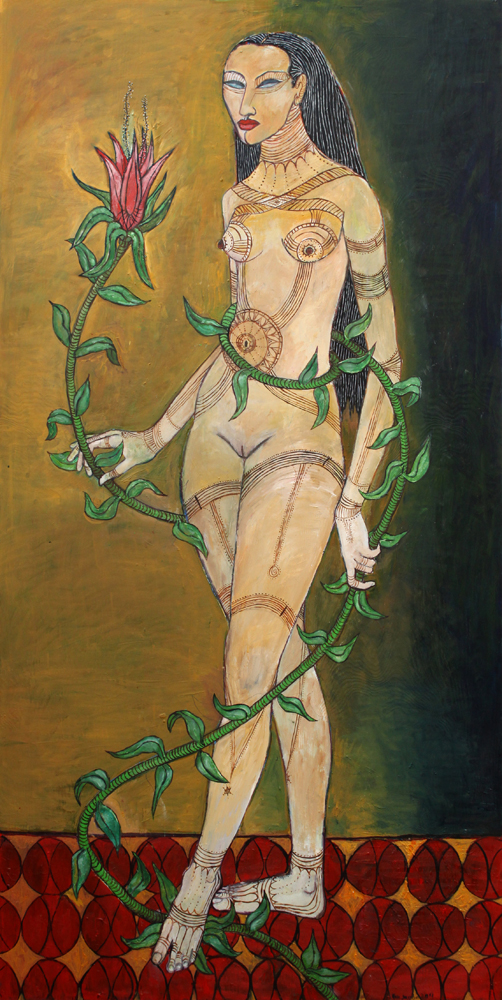 There are many references to Western art in Sambo’s work. Yet her art is in conversation with the art of ancient African kingdoms just as much as it is with the art of renaissance Europe. As in “4 Women I” and “4 Women II”, which speaks to African mask traditions, and in my view, to themes such as colonialism, decolonising of the mind, the rewriting of history and the situations that black women grapple with due to their race and gender. 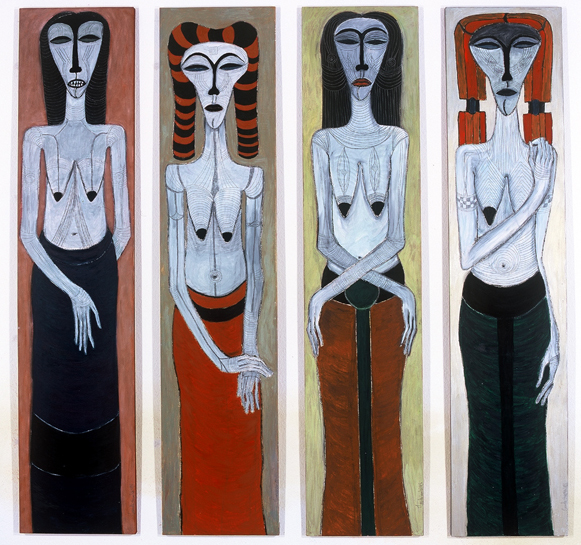 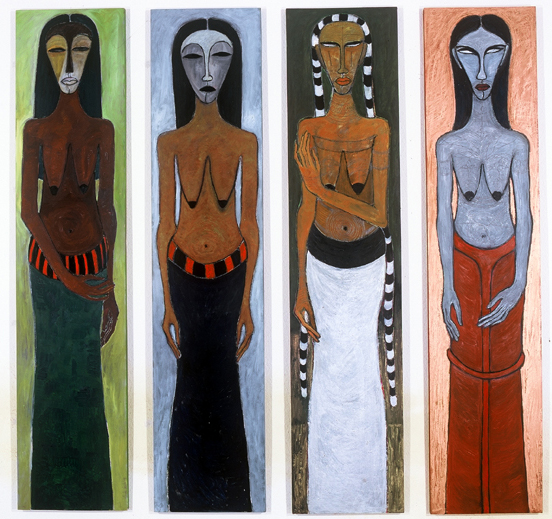 In September, Manuela Sambo will be exhibiting her work at the Instituto Camões in Luanda, Angola.

The images from “Unity of Soul: Paintings and Paperworks”  by ARTCO Publishing are reproduced with permission.