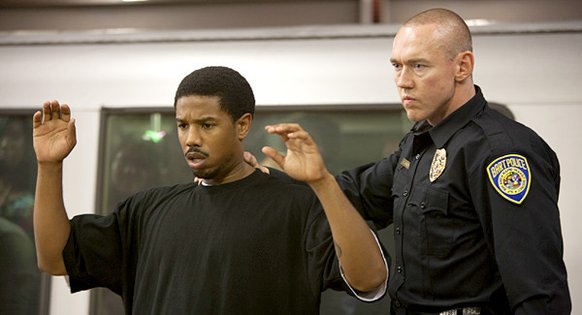 “The arc of the moral universe is long, but it bends toward justice,” said Martin Luther King famously in this speech. This may be so, but for Americans of African descent, one might add that it bends toward justice only when the unjustly treated bend it. Few groups have collectively been so wronged, over so long a time as Africans and their heirs in the US.

The discrimination continues until this day. While many doors have opened over the years, others remain firmly bolted. Black Americans still have the lowest incomes, the highest rates of unemployment and the mass incarceration of young black men AND women has been convincingly referred to as The New Jim Crow. Black Americans are by far the largest victims of hate crimes and, sadly, these crimes are often committed by the very people meant to protect the nation’s citizens from crime – the police.

Unfair treatment of African Americans, police brutality and racial profiling, are at the forefront of Fruitvale Station, a piercingly touching film by debut filmmaker Ryan Coogler. Based on the true story of Oscar Grant (Michael B. Jordan), a 22-year-old who wakes up on the morning of December 31, 2008 and “feels something in the air”. Not sure what it is, he takes it as a sign to work on his new year’s resolutions: being a better son to his mother (Octavia Spencer); being a better partner to his girlfriend Sophina (Melonie Diaz) and father to Tatiana (Ariana Neal), their four year-old daughter. The film unfolds in the brilliant exploration of Grant’s relationships with these three women in particular but also with his crossing paths with friends and strangers, and the tragic turn of events that New Year’s Eve in the Bay Area.

Fruitvale Station is an important film about the confrontation of living in a race- and class divided society. But more than that, it does what Twelve Years A Slave, in my view, intended but failed to do: it connects the dots between the still unreckoned with, deep relationship between slavery and the modern day cultural paradigm of white-supremacist Americo-capitalism.

Fruitvale Station premieres in the UK tomorrow (6 June) and I warmly recommend it.

Have you seen it? Are you planning to? Please share your thoughts below.