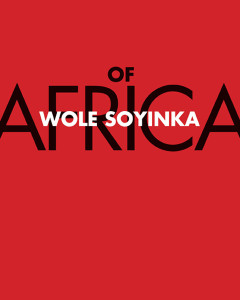 As reckless forces of terror-driven religious fundamentalism ravage Nigeria we would be wise to remember the insights of the ancestors. Unfortunately, as Soyinka argues in his most recent book, Of Africa, Africa as we know it today, “remains the monumental fiction of European creativity” marked by a type of religiosity that is a “destabilising agent”; a fiction that Africa and its citizens pay a heavy price for.

Most reviews of Of Africa have either misunderstood the book or deliberately chosen to focus on corruption, war and ethnic conflict in their evaluations. And while these topics are indeed discussed, thoroughly even, it is religion – foreign and especially African – that is the clear theme of the book. And, it is what Soyinka broadly refers to as ‘African religion’ that he rightly says has a potential to heal because “if there is one offering that passively awaits to irradiate the world with a seminal humanism it is the ‘invisible’ religion in the African continent.”

Already before reading the book, I had studied the Yoruba Ifa system of divination, which indeed is the main topic in Of Africa. I am not an Ifa “devotee”, as Orisha worshippers are often referred to, but I am curious – and appreciative – of the ways that African religion enhances our continent’s history. But Of Africa expanded my view on African religion in ways that no book I’ve previously read on the topic has done. This is not because it contains spiritual, academic or historical accounts per se but rather because Soyinka’s rich prose and intellectual unambiguity is not only useful to understand spiritual life in Africa but the very intersectionality of organised religion and African religion as a point of convergence for political, social, economic, cultural and psychological dis/order becomes clear.

As Boko Haram continues to wreak havoc in Nigeria, Soyinka has written a book that encourages his countrywomen and -men to criticise religion where criticism is due. Which is often. However, Soyinka’s condemnation of religion is not intended to disorient, judge or even blame religion for situations of extreme concern as the insurgency. In fact, blaming would be far too easy a sentiment. Instead, in the articulate and humanist approach that Soyinka is known for, he is asking the hard questions, urging Africans to inquire why it is that organised religion – Christianity and Islam in particular – have caused multiplex atrocities in Africa from slavery, war and now to fundamentalism. In so doing Of Africa pierces the religious bubble that the world’s most devout continent lives in with razor-sharp talons. Soyinka does not beat around the bush, he is not politically correct, he does not tolerate the intolerable in veneration of what is deemed sacrosanct. Rather he is discerningly honest and brilliantly urgent, bringing to fore questions that we all too eagerly sweep under the rug in our eagerness to look as good as possible.

There are some books that, like diaries, I return to time and again because of the grounding I find in them. One of those is Of Africa. I appreciate its timeliness, or rather its timelessness: it is part history, parts prophesy inasmuch as it is rooted in the present. It is a lamentation of continuing bad practices to be found in the African continent. But it is a lamentation that grips the reader gently, with balsamic wisdom and an immeasurable love for the continent and its citizens.

Imagine if you were able to peel the African continent along its shell-crushed, sandy coasts to reveal a new, if familiar, world. Imagine that underneath the heavy soil this “new” Africa would be magical but real, mythical but historical, a continent waiting to be discovered only this time by Africans themselves. Imagine the astonishment they might feel at finding what they had always taken for granted, or, overlooked.

Somewhere in the pages of Of Africa, I find this hidden world. I find this other Africa. It is an Africa where deliberate care is taken to understand and protect the philosophies that are rooted in its land. It is an Africa where religious fundamentalism does not fester because African religions have enriched the continent, not in a proselytizing way but as a discourse that enables us to peer into the heart of things with openness. As Soyinka writes, “We need not embrace the Orisa, however, to profit from the profound wisdoms that can be extracted from the Ifa. Our repositories of exclusive spiritual truths can learn from this ancient, unassuming faith of our forebears. Ifa is tolerance.”

Of Africa is in many ways a book ahead of its time. This is because it is above all a book about rescuing. Rescuing what, you might ask? Well, a people, a world even. And perhaps we do not (yet) want to be rescued. When the time comes, however, that we do, I know in my heart of hearts that Soyinka’s sincere, paternal intuitions will like those of Obatala, the god of purity, help us to lift the veil that for time being prevents us from peeling along the coasts of self-discovery.

In fact, maybe that time has come sooner than even Soyinka might have thought?

Have you read Of Africa? Any thoughts?

Adapted from “Religion in Wole Soyinka’s ‘Of Africa’” by Minna Salami in “Celebrating Wole Soyinka: The Lion at Eighty”, Chukwuemeka Bosah, Editor.