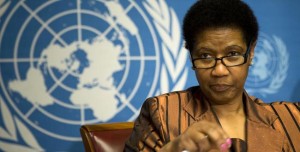 This week, more than 3000 delegates are at the annual meetings of the African Development Bank (AfDB) in Kigali discussing new strategies to tackle poverty, underdevelopment, and put their weight behind global schemes that ensure Africa’s progress.

To mark the occasion, UN Women Executive Director, Phumzile Mlambo-Ngcuka, published an OpEd today titled Women’s Role in the Next 50 Years – the Africa We Want. It’s a really good, really feminist piece and reading it I felt a bit ashamed for my tweets to her earlier this month. After all, she is probably, hopefully, doing all she can about involving UN Women in the Boko Haram abduction situation.

I’d like to amplify the six key things Mlambo-Ngcuka says that African women want for the future so I’m directly posting them below. I’ve added a seventh point of my own because I have a thing for the number seven and more importantly because without it the other six won’t happen.

Here’s the source for the first six points.