“In the stories we tell ourselves, we tell ourselves,” said Michael Martone rightly. We also read ourselves in the books we read, or at least in those books that we cherish. For this reason, one of my 2014 resolutions was to return to a favourite pastime, namely reading fiction. For some years my reading life has been dominated by non-fiction, which I’ve enjoyed, but reading novels can be a spiritual or at least a therapeutic act, opening valves of memory – lived and yet to be lived.

Below are short reviews of seven novels that I’ve recently re/read and which have indeed been both spiritual and therapeutic reads. There are others that I could have included, the choice is entirely unsystematic. 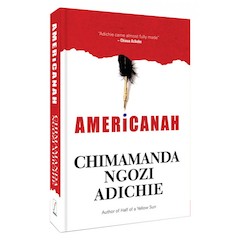 1. Americanah by Chimamanda Ngozi Adichie – Even before reading Americanah, there were two things prone to make me love it. Firstly, that it is written by Chimamanda Ngozi Adichie and I am yet to read (or listen to or watch) anything of hers that I haven’t loved. Secondly, well, Americanah’s main protagonist, Ifemelu, is a Nigerian woman and blogger who writes about race, gender, “Nigerpolitanism” and stuff like that: you can bet your bottom dollar I was going to love this book. However, what bewitched me even more than meeting a fictional colleague, was the passionate, vivid and feminist (I’d say) love story between Ifemelu and her love, Obinzeh, transcending both time and geographical spaces. In fact, Ifemelu’s being such an opinionated blogger (wink) meant that I was unable to read the novel in the detached way I tend to read novels. Instead, I kept finding myself stopping to consider whether I related to her blogging experiences. Looking through my notes in the book I came across this highlight, “If they asked what she did, she would say vaguely, ‘I write a lifestyle blog,’ because saying ‘I write an anonymous blog called Raceteenth or Various Observations About American Blacks (Those Formerly known as Negroes) by a Non-American Black’ would make them uncomfortable.” I highlighted this sentence because it reminded me of how I used to say that I blog about women’s rights rather than feminism to not make people uncomfortable. Those were the kinds of “interruptions”, if welcome ones, that I experienced reading Americanah. 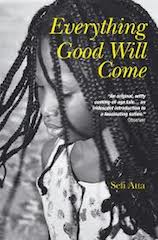 2. Everything Good Will Come by Sefi Atta – I read Everything Good Will Come first in 2008 and didn’t love it. Obviously, something was incredibly wrong with me at the time (and by that I mean that the book must have introduced truths that I wasn’t yet willing to shake hands with) because having recently reread it for my book club, this is one of my favourite novels ever. Atta’s protagonist, Enitan, is an unapologetically feminist and proudly Nigerian character. However, she is not ideological, she does not intend to be any of these things, she simply loves herself and questions the ways her society denies women self fulfilment. In fact at one point, having been “accused” of being a feminist, Enitan wonders: “Was I? If a woman sneezed in my country, someone would call her a feminist. I’d never looked up the word before, but was there one word to describe how I felt from one day to the next? And should there be?” If Ifemelu in Americanah shares my passion for blogging the African zeitgeist, Enitan is my soul sister. Her coming of age story in Nigeria, Lagos to be precise, often felt like reading my own thoughts. I followed her fictional world often through an all too familiar lens, equally heartbreaking as funny. 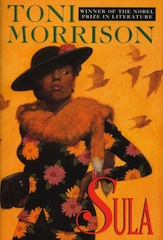 3. Sula by Toni Morrisson – Sticking to becoming a feminist, it was not until my early twenties that I started to think of myself as a feminist. To thank, or blame, depending on how you look at it, was a university professor (a white, male one, coincidentally) whose course, Gender Representations in Media, I was taking. His lectures on feminism left me eternally transformed. That sensation – a deep knowing that I was unlikely to ever settle agreeably into the gender roles that society encouraged – was one I’d felt years before when as a teenager I read Sula, only then I didn’t have the word ‘feminist’ readily available. Rereading it now has brought three insights: 1) That there is an essence at our core, our unique observation on humanity, that never changes. We simply (hopefully) become more aware of it with time. I say this because despite that it had been twenty years since I read Sula, much of it had stuck with me. Not just the story line and characters but their very memories, it felt almost like reading an old diary; 2) that to live life fully, especially as a woman, as I wrote in my last post, requires to not fear judgement. Sula’s fearlessness is coupled with her insight. But her life also serves as a warning, of what may happen when the heterosexual, patriarchal order is defied and a woman goes from sex object to sex subject, and; 3) that Toni Morrison is everything. E.V.E.R.Y.T.H.I.N.G. 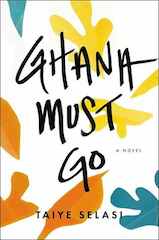 4. Ghana Must Go by Taiye Selasi – ahh, AHH, WOW. Here is a book with beautiful, jazzy sentences that jump at all your senses. Selasi is a wordsmith but don’t let her craftiness mask the other hat she wears, namely that of a teacher. The hidden, confused demands that people nevertheless reveal and rationalise in relationship are difficult to capture but Selasi’s lyrical sentences -however short, and they often are – manage to do just that. Through the lives of The Sai family (Kweku, Fola, Olu, Kehinde, Taiwo, and Sade) we explore relationships, even the ugliness, especially the ugliness actually, but yet their stories carefully reveal that love is efficacious at smoothing out even the most unforgivable memories. This is not an easy process for the Sais, and it isn’t for the reader either. I found myself needing to pause: to listen to the pauses. As one of the characters says, “Between the way things were and when everything changed, a moment within which one notices nothing, about which one remembers all. Which is the point.” 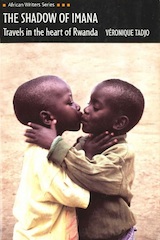 5. The Shadow of Imana by Veronique Tadjo – “Rwanda is inside me, in you, in all of us,” Tadjo writes in The Shadow of Imana, referring by “Rwanda” to the ghastly pogrom whose aftermath she writes about. This quote summarises aptly the delicate search for universal humanness that seems to anchor Tadjo’s story forward. Through recounting stories of people, “ordinary” human beings who are farmers, project managers, teachers and lawyers, but also simultaneously war victims or war criminals, her writing hatches onto something profoundly true, namely that we all are capable of more than we know, both good and bad. Nothing reveals this binding trait of humanness more than the way mundanity exists alongside the atrocity of war. To live, and be determined to live despite having the odds against you, is both a mark of struggle and of victory. The Shadow of Imana is not fiction – unfortunately I might add – but I’ve included it nevertheless as it’s a creative non-fiction or as Tadjo herself says (pdf) about her decision to go to Rwanda to write the book, “We felt it was important to reflect on what had really happened. So we accepted to go there, with the only condition being that we should respond as writers – not like the many journalists or historians who dealt with the genocide, but in our capacity as pure writers.” 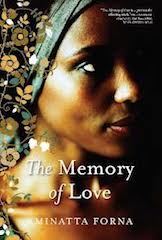 6. The Memory of Love by Aminatta Forna – Let me start by confessing that I found The Memory of Love somewhat laborious to read. It was a slow, dream-like read, ushered not so much by the events and characters as by the language in it. However, the language is jerkingly lucid, and the novel is an odyssey of discovery of a country – Sierra Leone – in post-independence giddiness juxtaposed with post-war dystopia. The Memory of Love is, amongst other things, a story that arouses reflections on African independence, conflict and most of all the borders, both of nations as of love. I read it tempted to attempt to find similarities in all these terminologically diverse yet emotionally related spaces. What similarities exist between the fragmentation of our hearts as of our maps? However, as the story unfolds, it becomes clear that trying to place love in any theoretical frame can only result in imperfect conclusions. The ‘memory of love’ and the ‘politics of love’ might both be terrains of unity but they are not, necessarily, places or reconciliation. 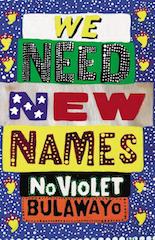 7. We Need New Names by NoViolet Bulawayo – Admittedly, I’ve only just started reading We Need New Names. I am a promiscuous reader and We Need New Names is only one of the many books I’m now dating. I mean reading. So I have not got to the part of the book where the quote I want to end this blogpost with is located. However, it was posted on the pan-African Tumblr, Dynamic Africa, and coincidentally my mum who was reading the book said to me, “Mimmi!” (as she calls me) “you have to hear this,” and proceeded to read to me the following:

Look at the children of the land leaving in droves, leaving their own land with bleeding wounds on their bodies and shock on their faces and blood in their hearts and hunger in their stomachs and grief in their footsteps. Leaving their mothers and fathers and children behind, leaving their umbilical cords underneath the soil, leaving the bones of their ancestors in the earth, leaving everything that makes them who and what they are, leaving because it is no longer possible to stay. They will never be the same again because you cannot be the same once you leave behind who and what you are, you just cannot be the same.

This first novel of Bulawayo’s has been a recipient of Nyong’oesque early career awards and honours and I have a feeling that I will reach the end of ‘New Names’, understanding precisely why this is.

OK, your turn. Have you read any of these books?