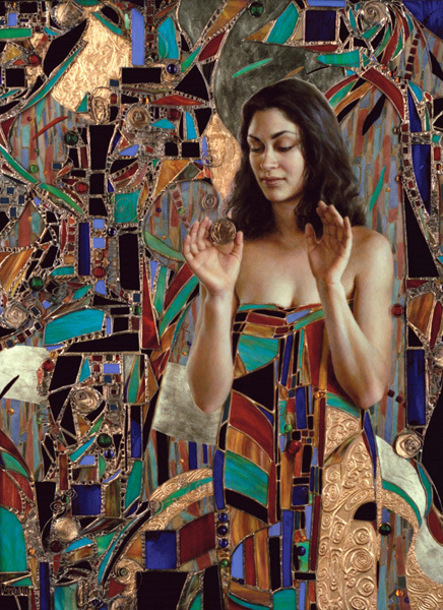 The conference, which took place in the Eastern town of Nsukka during an unusually dry week in July (precipitation for this month is normally high in the region) kicked off jubilantly matching the expectations of the excited delegates.

The camaraderie was short lived. On day two of WAAD, July 14, all hell broke lose. Unexpectedly, the programme convenor, professor of women’s and African studies, Obioma Nnaemeka, found herself having to respond to the question of whether or not white women (about one fifth of the circa seven hundred participants) should be able to “present papers on black women’s experiences”. Some delegates felt that white women, guilty of discrimination against black women in their home countries, should not be allowed to take part. The sessions should be a safe space for black women, they argued.

Nnaemeka organised an open session to discuss the issue. A disaster ensued. People broke down: there was weeping, shouting, yelling. The black delegates who had raised the issue threatened that they would not participate if white women did. This in turn led to tension among black women because it was a group of African-American and Black-British women who demanded the exclusion while women from the hosting country vehemently opposed it. Pushing out visitors of whatever race was contrary to Nigerian, Igbo (to be precise), customs, they argued. When the exclusion of a Bulgarian woman married to a Nigerian man was announced, the Nigerian delegates shouted, “No one, black or white, has the right to insult our wife”.

Then suddenly like a rainstorm during a drought, a delegate (of African American heritage) spoke up. Why not have a dialogue between the oppressor and the oppressed, she suggested. Others agreed, the best approach would be to talk openly about racism. The chair of the local organising committee, Julie Okpala, shared in a personal account of the session that “the conflict was resolved by a decision to allow white participants to present their papers” while women of African heritage still got an opportunity to explore their own realities in a separate space. Peace was restored and the conference proceeded, if carefully. 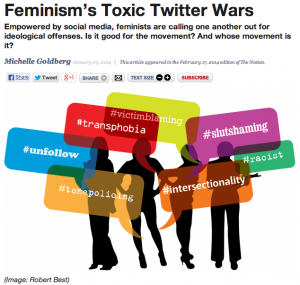 Compare the WAAD conference to “Feminism’s Online Toxic Wars“, a recent article at The Nation by Michelle Goldberg. In the piece, Goldberg argues, as the title implies, that online feminism has become so toxic it is hurting the movement. The toxicity is blamed on a form of intersectionality that Goldberg calls the “dogma that’s being enforced in online feminist spaces”. While the article is well-written and resonant in parts (I also have taken issue with Check Your Privilege type intersectionality before), it is nevertheless an example of hype. And as Public Enemy said, don’t believe the hype! The politics of feminist solidarity does not hold a black/white binary (as The Nation article disingenuously implies). Yes there is a tiresome trend of finger-pointing among some feminists on Twitter but if Goldberg had eschewed the stylish trickery to instead look equally into representation and visibility it would have become clear that what often seems to be “online trashing” is in fact an outcry similar to the one that occurred in Nsukka in 1992.

So, why do these outcries happen?

The simple answer is because the very device that patriarchy uses to dominate women – namely the dehumanising of them – is too frequently used by influential white women toward other women. We see this in caricature cakes of African women, for example, or in videos by white artists that use black women as tropes. Women of colour remain hurt by negligence to legacies that continue to affect black populations so widely. This is why the Nation piece is divisive, it is a four page article on a reaction with hardly any reference to the cause. It is not the rage and bitterness of racial exclusion that causes outcries but rather the lack of sympathy and outright ambivalence towards it.

Returning to Nsukka briefly, where there is perhaps no right or wrong to be found in the controversy. The conference was not for but about African heritage women so the white participants had every right to be there. On the other hand, the systemic exclusion of black women in the west causes deep, legitimate wounds. The ordeal simply demonstrates how important it is to communicate in order to find solutions.

And here is where we introduce conscientious feminism!

Conscientious feminism is approaching feminism with meticulous care. It is diligently seeking to understand the structures, attitudes and institutions that oppress women and subsequently finding them intolerable. Period. Not just the oppression of women of one’s race, one’s age, one’s tribe, one’s class. But of ALL women.

This is not the same as everyone getting along. God, no. In fact conscientious feminism is not about group thinking at all. We need fierce debate to move forward. But it is about moving forward rather than getting stuck. Oppression is not banal and we can not behave in banal ways to end it. Conscientious feminism is approaching uncomfortable truths in a complex and careful manner with the goal of empowering all women to be their full selves.

Thoughts? Would love to hear from you!

Update:  An expanded view on “Conscientious Feminism” is available to read on The Huffington Post

Image is Placement by Rose Frantzen, 1965