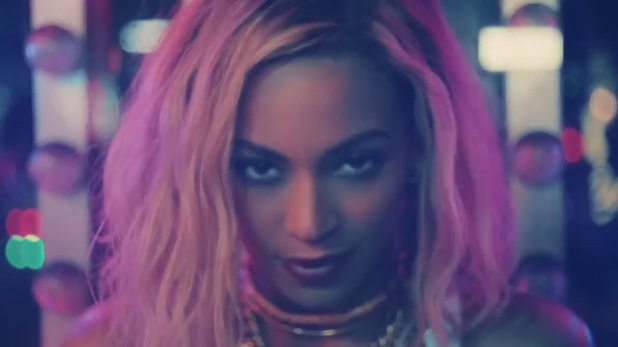 The entire album is sexually bold for a mainstream pop album. Some examples: first of all, in the thumping and infectious “Partition”, there’s a translated to french sample of Julianne Moore (in The Big Lebowski) saying, “Do you like sex? Coitus, the physical act? Men think that feminists hate sex, but it’s a very stimulating and natural activity that women love.” Just such a thing.

In “Blow” (the “lingus” song) the male dancers appear dystopian while the women having unleashed their expression of sexuality are in total control. In fact, many of the videos conjure a badass matriarchal world where women’s sexuality has been let out of its cage. This ravenous sexuality is present even in my personal favourite, “Superpower”, which is actually a song about love rather than sex. But even here, Beyoncé and her all female posse kick off a love-riot evoking an amalgamation of FEMEN, Occupy and civil rights protest.

While Beyoncé does not, unfortunately, objectify men (and I don’t mean objectify degradingly) they are hardly the subjects either. She is. A grown woman. Doing WHATEVER she wants.

Even Jay-Z who is present in many of the videos hardly appears in full body, rather we sense him. We see his back walking down a street, his hands reading a newspaper, his lips smoking a cigar. With the exception of “Drunk in Love” where he makes a full appearance, Mr Carter is a prop for Beyoncé’s sexual fantasies. V-power!

Speaking of “Drunk in Love” much attention has been given to the offensive “Eat the cake” reference in the song, and it is indeed unfortunate, but frankly, the assertiveness in the rest of the album would make the abusive ex-husband of Tina Turner roll over in his grave. That matters.

Add to all this the sample from African Feminist superhero, Chimamanda Ngozi Adichie’s, TedXEuston talk “We should all be feminists” in “Flawless“. Out of this world. Then sprinkle a level of honesty and vulnerability quite unlike the careful public profile Beyonce’s become known for. She is especially open in the ethereal tribute to motherhood, “Blue”, and to friendship, in “Heaven”.
In “Mine” Beyoncé sings: “Been having conversations about breakups and separations / I’m not feeling like myself since the baby / Are we even gonna make it? / Cause if we are, we’re taking this a little too far…” and in “Jealous” she explores how insecurity can harm a relationship.

A final point, “Beyoncé” contains no droning on about whether you can be a wife, a mother and a sexual being at the same time. You definitely can, it seems to say, but having it all ain’t easy. By contrast, “all” is a thorny, messy but altogether beautiful bouquet of female roles to fit in one vase.

Nevertheless, as honest, sexually mature and, yes, feminist as the album is, not to mention how perfect on the ear the songs are, there comes a point when you think, “Enough already!” and start looking through your iTunes library for some reeeal feminist shit, y’know, Fiona Apple or something.

Have you listened to/watched the album? thoughts?