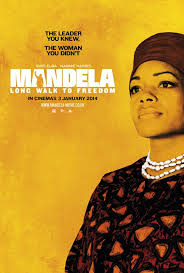 The latest Nelson Mandela biopic, “Long Walk to Freedom” is not a disappointment. It’s a moving, informative treatment of Nelson Mandela’s eponymous autobiography. And Winnie Mandela as played by Naomie Harris is compelling. Harris conveys well the impassioned spirit of the most powerful woman in the history of African anti-colonial struggle. The movie’s blurb states, “The leader you knew. The woman you didn’t”. This is a Winnie Madikizela-Mandela moviegoers have not been introduced to previously.

Yet Winnie’s story still remains untold. Harris does not capture – and this is not a fault of hers but of the script’s – the innate courage and natural empathy that makes Winnie such a paladin. Rather, so that we can understand, and condemn, Winnie’s later life: her love affairs, her involvement in the Mandela United Football Club and in particular, her radical political views that made reconciliation with Nelson impossible, Winnie is first portrayed as a naively sweet love interest of Mandela’s, later taking on her husband’s struggle only to eventually turn (if understandably) into a bitter, dangerous woman.

What type of woman did Nelson Mandela really fall in love with?

In truth, Winnie was not saccharin-sweet when she met Nelson but determined and independent (she was by then the first black medical social worker in South Africa, she’d run away from her family to avoid traditional marriage, she’d turned down a US scholarship to remain active in the ANC etc.). Neither did she simply fight her “husband’s” struggle (she fought her struggle, which was also black South Africa’s struggle and the women’s struggle). And she did not turn into a bitter woman (but rather a wronged one). Yet in the movie she is depicted in these ways to juxtapose to her ex-husband’s messianic portrayal.

Needless to say such an approach is unnecessary. Nelson does not need Winnie’s heroism to be diminished in order for his iconic status to be assured. He was a hero if ever there was one.

Also, obviously, “Long Walk to Freedom” is chiefly about Nelson not Winnie. So I’m not suggesting that Winnie’s role should be more prominent. Rather, I’m arguing that her portrayal is derivative. The film humanises Mandela (perfectly acted by heart-throb Idris Elba) but fails to do the same for Winnie. Her story remains an ensnaring mystery between celebration and denunciation.

The problem storytellers have with Winnie is that she is “un-neat”. She is a troublemaker, a political icon,  a woman who made heavy sacrifices for the struggle, a symbol of resistance, a femme fatale, and not simply “Mandela’s Wife”. In fact, Winnie’s (un)wifeliness was a refusal to become an emblem of racist and patriarchic nationalism. Which is not to say that Winnie’s political career wasn’t shaped by her becoming the estranged wife of the ANC leader, but her struggle was not the side dish of his struggle. It was IT. The same fight.

If, in a biopic about Winnie, Nelson’s struggle was made to seem like a by-product of Winnie’s activism, would viewers accept it?

I thought not. And nor should we accept the revisionism of our women heroes.

What should we do?

Above all, not be fooled. See critically. Listen ethically. Observe curiously.

A wise woman once said, “Behind every great man is a great woman”. True, although the great women are not always “behind” the great men. They are in the frontline. Being compromised.

Look, we have to continue to tell their stories: to write about them: make movies about them: sing about them: paint them. Subjectify them. Cherish them. Criticise them. Love them. Loathe them. All of it. Women’s stories Must.Be.Protected.

Have you seen the movie? Any reflections?—