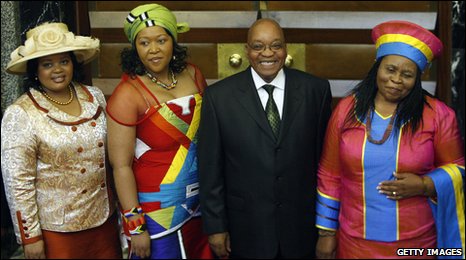 At its core polygamy is natural because men biologically need to spread their seed and it is hard for them to commit to one woman. Right?

But this argument is one commonly given to explain the tradition.

For instance, Ghana’s first president, Kwame Nkrumah, wrote in his autobiography that: “However unconventional and unsatisfactory this way of life may appear to those who are confirmed monogamists, and without in any way trying to defend my own sex, it is a frequently accepted fact that man is naturally polygamous.”

And following a law that would protect women in polygamous marriages in Tanzania in the 1970s, male deputies protested saying: “if a man has to get his wife’s consent to a second marriage, the African tradition where man has always been superior to a woman will be endangered.” (source)

In more modern times, President Jacob Zuma of South Africa has defended the tradition in similar terms, saying that it’s better than cheating (which, he has nevertheless also managed to do).

Yet even if natural urges are the reason men might choose polygamy today – which I doubt, considering it would take an admirably virile man to keep an amount of women sexually satisfied – historically the sexual aspect was hardly the most relevant. Furthermore, women also have natural urges.

The truth is that polygamy was to do with status and wealth. The more wives a man had the more his wealth grew. Why? Because it was women and their children who worked the land. That is also why, contrary to popular belief, monogamy was equally common in precolonial Africa if not by choice. As historian Samuel Johnson writes in his seminal book, only the wealthy can avail themselves of the luxury of polygamy.

Even for women, polygamy in ancient times was not always disadvantageous. Through polygamous marriages women in precolonial Africa often had greater personal autonomy. As new wives joined a compound, older ones could focus on their trading. And successful women traders, such as the Iyalodes in Yorubaland, had a lot of power. While autonomous female traders are traditionally linked to West Africa, studies have found a long history of women’s trading also in places such as among the Kikuyu in Kenya as well as groups in Uganda and Zambia.
Also, women could take lovers that would pay husbands for the “loan”, if the husband allowed it – which some would if the wife was not the first or last.
In Guinea, albeit during colonial rule, in order to escape nagging husbands and join the independence struggles, women went so far as to acquire wives for their husbands as explained in “Emancipate your husbands“.

Of course, whatever autonomy polygamy afforded back then, it was subsumed by colonialism and the rise of puritanical missionary teaching.

I’m sure that what we today describe as romantic love could be found in polygamous homes. Humans are biologically predisposed to feel romantic love. But since couples in love would run away from their parents to be together to avoid polygamous marriages it seems likely that it was not the norm. There are accounts of missionaries “rescuing” a woman being kidnapped only to learn that it was staged. It was in fact the woman’s boyfriend “kidnapping” her so that they could escape the inevitability of her ending up in a polygamous marriage.

Polygamy has far from disappeared. From President Zuma to village heads in Zimbabwe to my own granddad (who married four women), polygamy is part of the fabric of African life.

I don’t think polygamy should be illegal. As long as our societies are marked by both poverty and patriarchy, it will continue. Women still depend on men financially and social norms entitle men to dominant roles. (Of course, I wish both poverty and patriarchy would end.) And I certainly think that as long as polygamy is legal, women should also be able to marry more than one man. Also, some people might be genuinely happy practising polygamy.
But please spare me the macho spiel that polygamy in African society is about men’s natural sexual urges.
It’s not about sex, it’s about status.