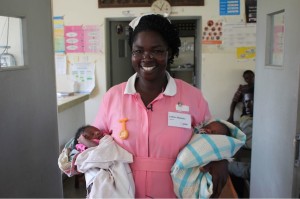 I’m helping a leading African health development organisation, AMREF (African Medical and Research Foundation), spread the word about their Stand Up For African Mothers campaign to nominate a Ugandan midwife, Esther Madudu, for the Nobel Peace Prize in 2015.  If you watch this video you will see why this remarkable woman deserves the prize and all the support in the world.

Esther Madudu is a midwife at the Atirir Health Centre in Katine, Uganda. She has devoted her life to looking after pregnant women and their babies, leaving her own children (a ten month old, a two year old and a six year old) in her mother’s care so that she can dedicate all her time to this work. By all her time, I mean all her time. Esther works with just one other colleague, and between them, they see over 150 mothers each week for ante-natal care and deliver fifty babies every month. They do this often without electricity, with mobile phone and candle light. It is safe to assume that Esther has saved many, many lives in the course of her twelve-year career.

Is it not odd to abandon your own children to save other’s children?

Esther admits that it’s difficult. “I was busy over the entire holiday period last Christmas, so I could not go and see my kids,” she says. “I am sure they were upset – they do not understand why they have to live with their grandmother permanently. I have to do this though, because without me, some children will not even get a chance to live.”

Stand Up For African Mothers is also a campaign aiming to train an extra 15,000 midwives by 2015, each of these midwives in return can care for 500 mothers each year.
Someone recently asked me what difference it makes to have more women in leadership in African countries. There are of course many reasons why this is important, not least because women make up half the populations, but my first response was that the more women in leadership the more likely we are to see an end to the shameful situation that is abysmal maternal healthcare.

In fact, for a continent that sees motherhood as central to a woman’s existence there is shockingly little being done about the high amount of women dying from giving birth. Ironic, huh?

Please spread the word about AMREF’s campaign and sign the petition to in support of Esther’s candidacy for the Nobel Peace Prize: https://www.amrefuk.org/petition