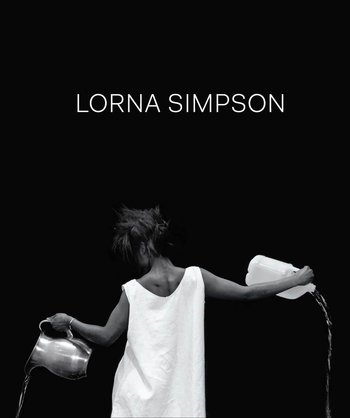 Why do I like pictures that seem ghostly? I’m not religious and I am no more spiritual than any one else. I’m not an atheist either but I cherish rational argument. I spend quite a lot of my time upside down, in Adho Mukha Svanasana and occasionally Urdhva Dhanurasana and so on, and yet despite my fondness for these poses, I prefer taking the world upright. I don’t watch horror movies because although I mostly find them silly, they cause me nightmares.

So, why am I attracted to phantasmal images? I reckon it’s because the ghost is humanity’s alter-ego and, this, intrigues me.

A few days ago I became transfixed with this photo of Lorna Simpson’s titled Corridor (Night) that I stumbled upon in a new book with the eponymous title “Lorna Simpson”.

More specifically, I was glued to the image on the right of Corridor (Night). There’s a woman in the photo, Wangechi Mutu, although she is not being Wangechi Mutu in the photo. The photo, by the way, is also part of a beautiful video installation.

At any rate, the woman is in her bathroom that has no bathtub or shower. She is wearing a terrible pink gown but it looks great on her. She is applying Shea butter on her collar bone where she is sunburnt.
That’s what I imagine is happening although the sunburn is unlikely since the trees outside of the bathroom window are deprived of their green jewels. But because it seems to me that the woman is an apparition, it doesn’t matter why she is doing what she is doing. Why do I find her ghostly? Because her presence in the room is bare; she has no reflection in the mirror in front of her, there are no drops of water in the sink, her side of the bathroom does not have a toothbrush mug.
It’s not an image of a Blackwoman in a  bathroom, it’s an image of a bathroom with a Blackwoman in it, her presence conspicuous yet unassuming.

Would the image have the same effect on me if the woman wasn’t black or if a man was in the room instead? Perhaps, but I don’t care to imagine those scenarios. Lorna Simpson’s art may speak volumes about race, gender and identity; it’s undeniably subversive and political, but what stays with me is not academic, but rather a personal memory, as if I were observing someone in an old family album. (And who looks at someone in their family album through a race/gender lens?) The woman is not a problem to be solved, she – the ghost – is affirmed and aware.

I turn the page and and on page 140 I find a man in a suit standing in a cloud. It’s lovely! Like much of Simpson’s work, it’s haunting, mysterious and beautiful all at one. But more on his ghost some other time.

Do you like this? What does the picture say to you? would love to hear your thoughts!