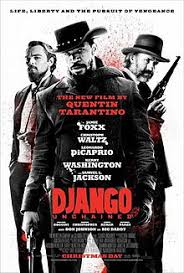 Spike Lee did the right thing in publicly taking issue with Django Unchained, the latest Quentin Tarantino movie about a freed African slave who embarks on a violent journey to save his wife.

The wife character, Broomhilda, played by Kerry Washington is monotonous to discuss for hers is a shockingly flat role. Her character serves the sole purpose of providing a backdrop in a fairy tale fantasy about an alpha male.

The main characters – Django, the German hero who frees Django, the slave owners and their house slave – are equally unrewarding to unpack firstly because, in order to make comedy out of enterprise of slavery, they are so strategically depoliticized. Secondly, they contribute so equivocally in depicting slave rebellion as a myth (when slaves most certainly rebelled) that even their fictional credibility seems farfetched.

The sub-text of Django Unchained is one which reflects US race culture at large, namely the misrepresentation of slavery as disconnected from the present day. After all, what better way to disengage from continued nuisances of racism, patriarchy and exploitation culturally than by offering a token black male superhero who exists in a vacuum and white characters that are so comical that no white American today could possibly relate to them.

Having watched the movie I felt nothing less than crushed, not by the story itself, as insensitive as it is, certainly not by the gleeful director, but by the general approval it has received from black audiences.

When we respect ourselves, we act and react in ways that are congruent with self-regard. We do not accept inappropriate depictions of ourselves because we admire ourselves as we are and not out of some delusional fantasy. We don’t accept ridiculing, condescending portrayals that reinforce negative views and that function as fodder for guilt-ridding aspirations of others under the banner of “light entertainment”.

And by the way, while the movie is not a documentary and thus has every right to practice invention, it is not quite a farce either with its references to black history facts such as Alexandre Dumas’s heritage.

There was a time when a black person in the American south could be killed simply for looking a white person in the eye, let alone by rebelling against him or her. Yet many did. I shudder at the thought of what these ancestors would make of a story that implies that they did not fight for their independence, what would the articulate and determined ancestresses make of seeing themselves portrayed as voiceless props.
Django unchanined, for all its Tarantinoesque flair, ridicules the greatest tragedy in African history and I am grateful that Spike Lee took upon himself the thankless task of repudiating the slander.