“Nigeria does not have democracy” I tweeted last week, resulting in a brief discussion which Diary of a Media Junkie has put into a storify board. This post develops from that tweet.

First of all, let’s adopt a simple definition (by Robert Dahl) of democracy as a political system that allows meaningful competition for positions of government power, an inclusive level of political participation in the selection of leaders, control of the agenda for citizens, opportunities for enlightened understanding, freedom of expression and fairly conducted elections.
Based on this, I’m not sure we can, or should, call Nigeria a democracy.

Here’s a few reasons why we can’t – There’s more obvious stuff like corruption, unequal wealth distribution, low accountability. The gap between delivered improvements and people’s demands of improvement is wide making people restless which in turn increases the threat of violence, terrorism, coups. Many former military rulers in leadership positions are  backed in/directly by the superpowers of the world. These guys (and they’re almost always men) manipulate ethnic identity for political victory. In fact the issue of ethnic diversity in Nigeria has been politicized to the extent that even groups that previously didn’t seem to rationalize in terms of cultural identity now do so.

Despite strong divisions there are hardly any attempts to build unity between ethnic groups, a prerequisite for democracy in an ethnically diverse state if you ask me. One option is coalitions, but coalitions are problematic as they reinforce difference which at this point is not wise. Also can you picture the decision-making process in a coalition? Help! Maybe a veto right for smaller groups might help? In previous constitutions this has proved a failure, but perhaps it could be revisited. Probably the federal state is the best way to solve the issue of diverse ethnicity democratically as it promotes equal representation from all states. On the other hand, this enables different states to incorporate undemocratic values into their state laws. Such is the introduction of the Sharia law in many Northern states. Dilemma!

We shouldn’t call Nigeria a democracy because we need to name the problem that we are trying to solve or we will inevitably fail. A plaster on your forehead will not help when you have a wound on your knee nor will asking the butcher for a slice of tofu make you a vegetarian. Taking medication for malaria when you have typhoid will not cure you. I think I’ve made my point now. We are calling Nigeria a democracy yet most of the problems we are trying to solve are problems that arise when a society is not a democracy. We stifle the democratization process by validating the façade. 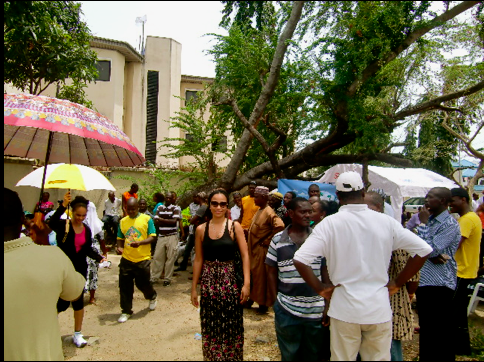 I took this photo at a polling booth in Lagos last year on the day of the elections. I can’t ever forget that day. The excitement  present at the booth was precious. People were proud and chatty. There was a sense of unity and hope. We spoke of having come a long way from the horror of the Abacha regime.What we can do

What we can do

I wish that this day was a representation of reality in Nigeria. Until it is, we need to change the nature of the discussion. Take for an example a piece by Yemisi Ogbe about the non-egalitarian spirit in Nigeria. (It’s the only link I’m including in this post because I want to encourage you to read it.) If you look at the comments, you will see that there is a sense of authentic discussion happening. Because Ogbe hit the nail on its head about Nigerian society, however unfavorable, the energy can now be directed to the real issue at hand.

To increase the sense of unity, we could for example promote inter-ethnic marriages, set up institutions that control that ethnicity isn’t used as a manipulative political tool, and tackle shared history. We don’t deal with the legacy of slavery, colonialism and neo-imperialism in Nigeria so that people can become enlightened, conscious citizens. It is part of democracy to set up institutions to address this history, to teach children about it, to find ways to heal from this trauma and suffering which affects the political and psychosocial behavior that we see today. We have no truly notable monuments that we can visit to mourn this past and that can remind of who we are, where we come from, of why Nigeria exists in the first place. When I’m in Lagos, I like to visit the  beach to honour the ancestors but I wish that there was a shrine or something similar that all Nigerians, regardless of class, gender,ethnic group could go to to mourn, heal and understand.

I think the use of creative expression is crucial in creating unity and healing. I think we can and should focus on supporting and promoting the rich arts sector in nigeria as much as possible because as long as a sense of unity is not established, democracy is not prone to work in Nigeria.

What is Nigeria if not a democracy

We can call Nigeria a pseudo-democracy or a virtual democracy or an electoral authoritarian regime (or borrow any other one of those snappy terms) but we can’t call it a democracy.

In fact maybe there is a better model for Nigeria than democracy, who knows. Only an honest discussion amongst citizens can tell.
I do think democracy is a pretty good idea, by the way. And I understand that compared to the military regime what we have today is a major improvement. I also think that what is at the core of Nigeria, its soul if you like, is something dynamic, humanist, and democratic –or meritocratic perhaps–in its own way.

What do you think? What can we do to promote democracy in Nigeria?