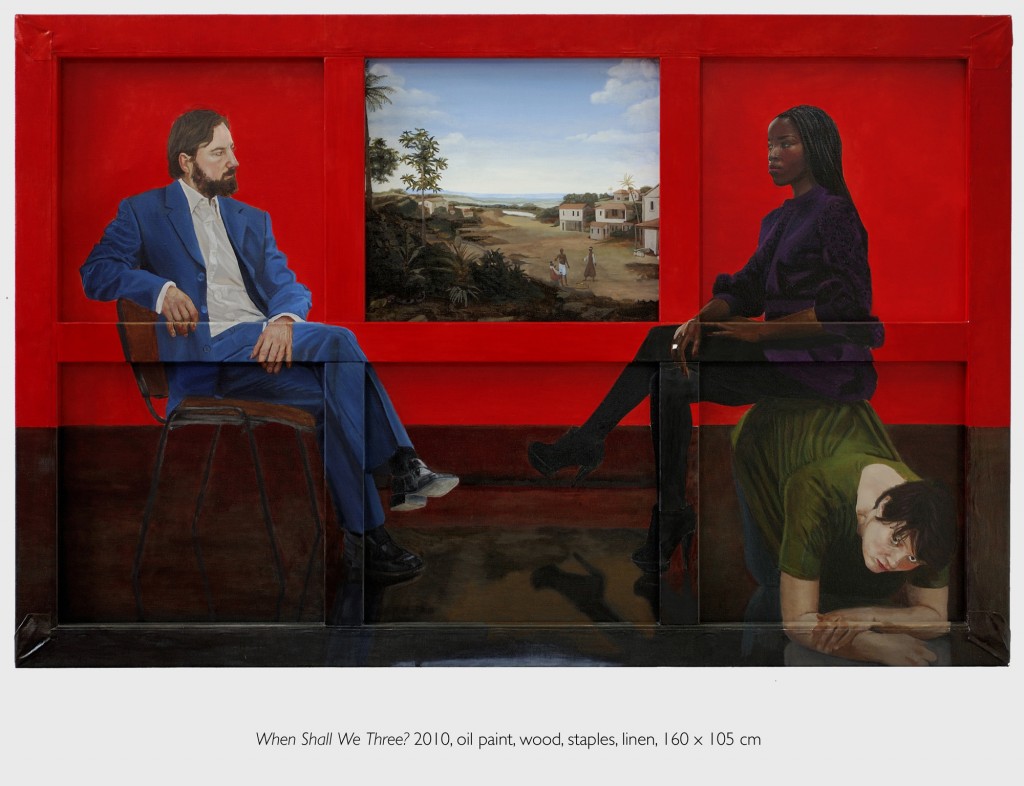 Drama Queen (Scenes from the life of Njinga Mbandi), 2010

In my view, if Kimathi Donkor‘s painting of Queen Nanny of the Maroons was an antique, precious Tarot card, she would be ‘The High Priestess’, standing as a veil between life and death, her arms outstretched; one mercifully forgiving, the other holding a deadly sword, reminding us that when it comes to life, she both gives and takes…

To view the painting of Queen Nanny alongside five other dramatic large-scale paintings of African heroines (including ‘Drama Queen’ pictured above) who each helped define the modern world, and, who are revered as armed warrior women, Iniva at Rivington Place is showing a roughly two-month long exhibition of Kimathi Donkor’s Queens of the Undead.

Queens of the Undead is a series of works exploring female power through the filters of modernity, history, legend and myth. Each painting is simultaneously a contemporary portrait, an exploration of art history and a resurrection of an historic female commander from Africa and the diaspora. In the works we find Queen Njinga Mbandi who led her armies against the Portuguese empire in Angola; Harriet Tubman, the underground railroad leader who freed dozens of slaves in the 1850s; Queen Nanny who led the Maroon guerrillas that fought the British in 1700s Jamaica; and in what is now Ghana, the 20th century anti-colonial commander-in-chief, Yaa Asantewa.

All four warrior-women portrayed in Queens of the Undead, quite possibly intentionally, remind me in a haunting way of how repetitive history can be. Warriors. Destroyers. Mothers. Desirable women. Feminine wrath, strength and acuteness all intertwined in captivating bold scenes. The paintings challenge – without compromising artistic sensibility and subtleness – our perceptions of historical accuracy. They cause me to observe the predicament that with the ebb and flow of time, not only are the same questions resurrected but their ineffective answers too. Does a woman’s masculine side compromise her womanhood? Never. Does her feminine side compromise her humanity? Too often. Then why do we still inquire into our social existence so mindlessly? Ask otherwise, the paintings seem to urge. Re-memb(h)er.

Bob Marley’s words (and also Haile Selassie’s) echo through my thoughts when I leave the exhibition. Queens of the Undead forces us to view, in a mesmerizing way, the persistent struggle for liberation by Africans, as well as the paralleled and obstinate historical battle against patriarchy by women.

Queens of the Undead runs until 24 November. Admission is free. For more, visit www.iniva.org