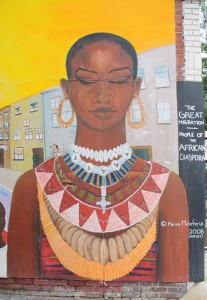 I should also clarify that African feminists here, as mostly elsewhere, refers to feminists of African heritage both in Africa and in the diaspora, and that with ‘African women’ I’m referring to women of African heritage who are rural, urban and of all social classes who live in Africa and across the globe. Lastly, the views expressed below are mine and my choice to highlight seven key issues is not to suggest that there aren’t other equally pressing and important issues or that these seven are comprehensively covered in this one post.

All-righty, on that note, let’s start with the Big, Bad Guy.

Patriarchy
Africa is no different to other continents in the world, where whatever autonomic space the society offers the individual, it is less if one is female. Unfortunately we don’t know of a time in modern history when women of a racial/ethnic/class group were not disadvantaged in comparison to men of the same racial/ethnic/class group. We know of times (including this current one) when women of one race, ethnicity and/or class may have social advantages over men of another race, ethnicity and/or class. African feminists pay attention to the ways that patriarchy – that is, the psychological and political system that values the male higher than the female – uses law, tradition, force, ritual, customs, education, language, labour (etc.) to keep women governed by men in both public and private life. African feminism sees that African men and women could have mutually beneficial, transformative and progressive relationships in the private and public spheres if our relationships were non-patriarchal and egalitarian. Nevertheless, African feminists assume responsibility for striving for such equal societies rather than hoping that men will someday redistribute privilege and power to create a better, more harmonious prospect for future generations.

Race
African feminist thought does not solely deal with the ‘male-female’-imbalance because that would leave out other factors that affect African women’s lives, one of which is racial hierarchies and the politics that come along with them. In fact, African feminists tend to be well-versed in how racial politics has undermined those practices in parts of historical Africa that had complementary elements and that nurtured a spirit of mutual intimacy. African feminist writing aims to ‘undo’ the roles and conditions that made Africans dependent on their colonisers, to ‘unwrite’ the burden of a history of imperialism that spans through centuries and to give a new language with which African women and men can progress from the racialised trauma that till this present day affects women and men albeit in different ways.

Tradition
It’s quite unpopular to criticise African traditions, or to point out that African history is marked by male dominance which African women have always resisted. Whether it is to do with the household, marriage customs, production methods or sexual freedoms, African patriarchal traditions for the most part make distinctions between male and female in ways that disadvantage the female. African women have been silenced for too long about the crimes of traditional patriarchy such as the abusive and dehumanising institution of patriarchal polygamy, widow abuse, genital cutting, witch-hunting and women’s lack of access to property and power in traditional society. That said, African feminist thought doesn’t seek to abandon tradition, as tradition also harbours a precious cultural memory and a rich legacy of knowledge and spirituality. Rather the goal is to enable tradition to adapt to its times so that rather than stagnate, it can enrich society, as customs and culture should do. Take for instance Sisonke Msimang, an African feminist who here describes incorporating the lobola (bride price) in her wedding ceremony in a completely feminist way! That’s a great example of how to maintain cultural pride whilst simultaneously preserving a commitment to evolution and harmony.

Underdevelopment
Africa, according to statistical indices, is the poorest continent in terms of people’s access to basic amenities. African feminist thought honours that poverty in Africa and wealth in the west are structurally linked. The west’s continued injustice towards Africa through military intervention, resource exploitation, NGO propaganda, unjustifiable debt and trade practices, and other neo/colonial practices of the power hungry has devastating effects on African states ability to cope with such factors as HIV/Aids, women’s sexual & maternal health and infrastructure development. Perhaps worst of all, is that the underdevelopment of Africa has impeded on the development of consciousness through adequate educational systems. As a result, African societies have been unable to naturally progress in ways where their jurisdiction, agriculture, intra-continental trade, indigenous healthcare and philosophical outlook has advanced to match the needs of citizens. In addition, this lack of consciousness development fuels unexamined claims like that the pursuit of gender equality is unAfrican or that homosexuality is sinful. Furthermore, poverty affects women worse than men in developing parts of the world because as Thomas Sankara said, “…women are dependant of the dependant.” African feminism seeks to enlighten that in order to develop African countries need to create social institutions that will resist foreign hegemony over African people, encourage engaged thinking and a workforce inclusive of all of its population on equally focused footing.

Sexuality
To point out the obvious, lesbians are women and homophobia and the persecution of African queer women by African states is a key issue in African feminist thought. The question of female sexuality in all its manifestations, and the control and suppression thereof, is in fact a central preoccupation for African feminists.  How do we challenge the state that pushes a rigid heterosexist idea as the norm? How do we unlink sexual dominance from sexual pleasure? How are women’s bodies made to bear the wounds of history; and of foreign intrusion and prolonged national struggles?  How do we address the psychological and physical suffering that women endure after violation? African feminist-centered thought and activism aims to query into and dismantle the mindset that doesn’t encourage the fundamental human right of ownership over one’s body.

Global feminism
For feminism to be far reaching in impact, African feminists, like all others involved in the women’s movement need to collaborate with each other as we are also co-dependent in an increasingly interconnected world. In the 20th century, African feminists were largely engaged in eliminating the arrogance and imperialism that had been imported through white-western feminism into African women’s narratives, but in the past decade or so the focus has been on ways to work together despite differences and especially to strengthen ties with Latin American and Asian feminist struggles. This pattern is in varying degrees the zeitgeist of all global feminisms, even though theory and practice are not always in unison.
African feminists need to curb (but not neglect) their anger towards the negative images that many white feminists have perpetuated and focus on the resourceful work that many white feminists have produced, and white feminists need to be starkly aware and critical of their privileged position.Only then can we mutually seek to empower the strength at the heart of womanhood.

Love
Love is something that all human beings desire in life yet it is an undervalued emotion in the worldview that shapes much of modern ideas. Using art in all its forms, for instance, to infuse theory with passion and emotion is for many African feminists a radically transformative act. Art is a realm where African feminist positions are not stated, but are symbolically represented. By creating new intellectual traditions aside of white/male academic history,  African feminists are in effect questioning the legitimacy of  knowledge production and decolonizing and depatriarchalising minds.
African feminist thought is fuelled by the idea that love and justice are complementary to revolution and change. It is focused on healing, reconciliation, and on an insistence that the language of African womanhood, from its global position, is the language that can transform society into one where sexual, racial, spiritual, psychological and social equality are afforded. In such a society people can pursue lives with less daily micro- and macro-aggressions, less hostility and more space for self-realisation. From Miriam Makeba’s music to Oumou Sy’s fashion to Nike Ogundaike’s art, African feminists are at the forefront of using creativity to express that progressive thought is not only cerebral but also visceral and expressive.