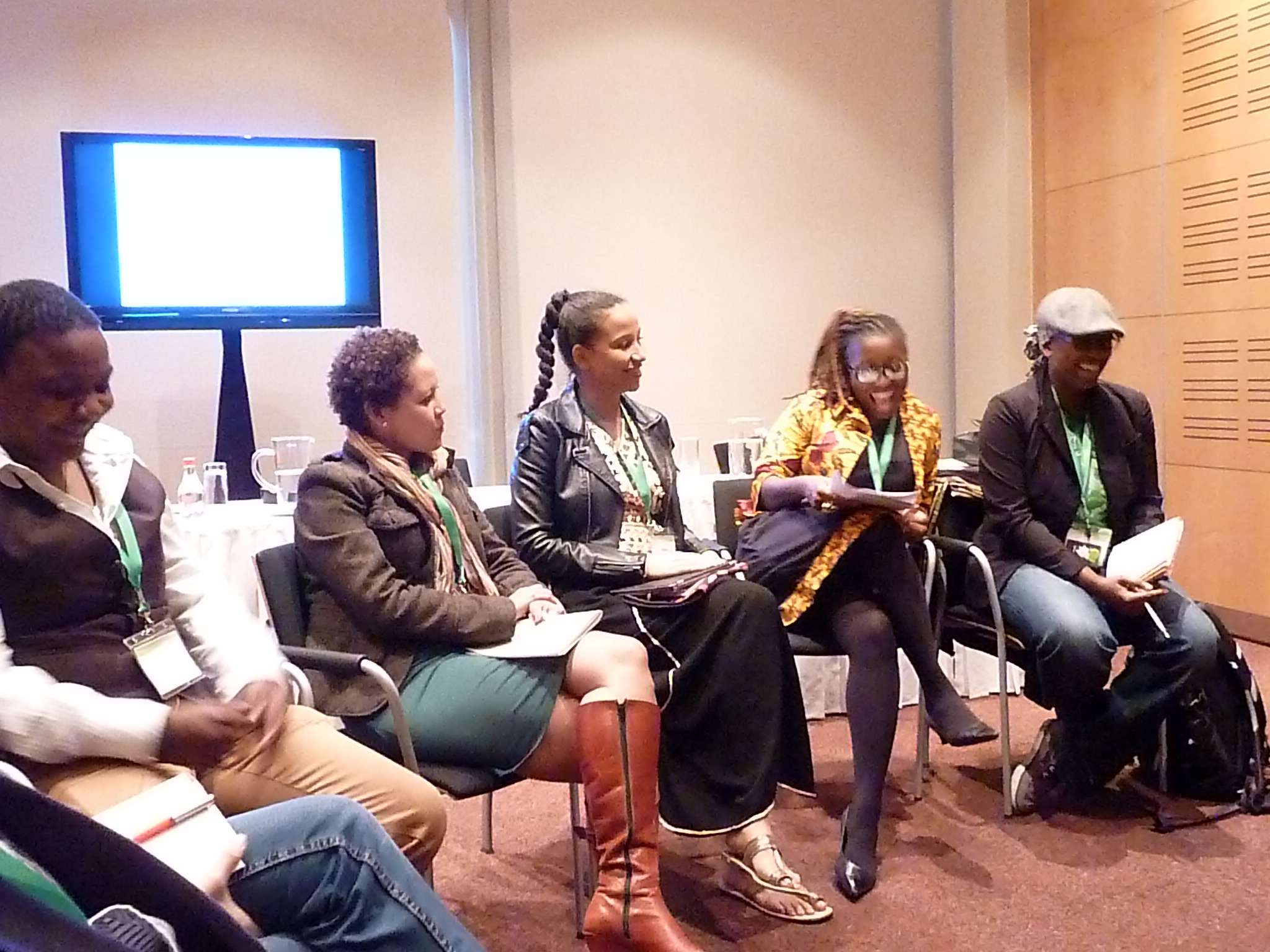 I got back in to London this morning from the YouthSummit and the OpenForum 2012 in Cape Town, a very relevant conference that brought together African thinkers from creative, activist, scholarly, political and technocratic backgrounds. It was expertly put together by OSISA, who as promised created a truly “unapologetic space for reflection and debate”. From Femi Kuti to Mona El Tahawy to Pettina Gappah, the panels consisted of game changers from diverse professional backgrounds as well as age group and regions. I’m confident that the result will be fruitful exchanges in terms of future agendas and plans to promote African interests and I’m still buzzing from all the knowledge and ideas I acquired. Apart from the key themes–Money, Power & Sex–the following, although by no means an exhaustive list,were in my opinion seven key concepts that African thinkers are chewing on.

The role and relevance of global institutions was widely discussed. Are global institutions beneficial or harmful to Africans? Should they be entirely de-associated from future development work? What can be done about the hypocrisy involved in global institutions’ policies? And what are the consequences of relying on the aid industry for development? Personally, I believe that the next step in the aid industry dialogue is to cease to question whether it is beneficial or harmful for Africans and to proceed with addressing its negative sides. The aid industry is the primary area of west/Africa relations that imports undermining and racist legacies of the past into our present day. I say this for several reasons. For example, in report after report concerning poverty in Africa it neglects to situate poverty also in its historical causes. Also, the aid industry isn’t accountable to anyone. It alleviates ‘white guilt’ through what has been called the White Saviour Industrial Complex. It creates imagery that depicts Africans as sub-humans. Basically, whilst on the one hand working towards justice, on the other hand, much of the aid industry is structured to rely on the very same pillars that upholds racial injustice. This cycle needs an overhaul if it is to create change rather than empower the status quo.

Aid, as in to give support, is of course something humanity needs to engage with more, not less. I am referring here to the aid “industry”, which as the name implies is woven together with other industries that are part of the world order we find ourselves in.

Values and Frames has some insightful material on how not to reinforce supremacist thinking in campaigns and War on Want is an example of an alternative type of NGO.

Over the past year or two the issue of homosexuality in particular has been creating much controversy in Africa. The west has threatened to withdraw aid from states that legislate homophobia, which although in this case has an important cause at the forefront, is another indicator of the master/servant nature of the aid industry. Perhaps the one good outcome of these events is that it has mobilized LGBTI activists and allies.There is an urgent need to understand that much of the resentment does not have to do with historical traditions, as many precolonial African societies were accepting of same-sex relationships (I’ve written about that here) but with a much more deep-rooted belief in homogeneity. Although cultures and traditions have shifted from century to century, an element that seems to have remained quite constant are ‘absolutes’. I think that we need to find ways in which we can maintain strong ideas of community whilst being critical of ideas within the community that ostracizes members or that function from a desire to assert ourselves in opposition to the west.

The OpenForum 2012 proved that contrary to what international mainstream media would have us believe, Africa is well equipped with activists who are using powerful, Africa-centered and effective ways to dismantle the mindset that fails to allow people the primordial human right of ownership over ones body.

In the last two decades, the most successful social movement in Africa has been the women’s movement, particularly in policy and legislation. Yet disproportionate amounts of women are still terribly marginalized and unable to exercise their rights, a predicament which I’d argue has much to do with African feminist ideas not being sufficiently merged with Gender and Development (GAD) work, which again has much to do with NGO-ization of this segment. Questions were posed around the politics of sexual pleasure, of how patriarchy and media interact, of how women are occupying political movements, of how traditional gender roles cause violence against women and in a session that I participated in (pictured), we discussed how African feminists are combining online with offline work.

I must say, it was African feminist-heaven! Many of the sisters who use the #AfriFem hashtag to share information on twitter were present, as were African feminists scholars, activists, artists and politicians. Those who believe that feminism is unAfrican would have seen something different at this conference.

Although African economies are growing, inequality remains a major problem bringing the need to question how civil society and the state can better work together. Questions were raised on the role of citizens, on holding south-south dialogue and on building policies and justice systems that reflect African societies to name only a few. Central to these discussions are finding the ways in which we can create synergies between tradition and modernity, a threshold many of us stand before, and one which simultaneously is exciting and daunting.

There could have been room to include more broad discussions on creativity. But maybe this is my bias! I think that creative arts plays a fundamental role in shaping society, identity, modernity and could inform even more greatly the looking inwards process that we are undertaking. However, although I would have wished for even more discussions on creative arts, there was indeed a juicy discussion on a panel which included personalities such as Femi Kuti, Simphiwe Dana and Binyavanga Wainana to name a few. Outside of the conference schedule participants were spoilt with poetry by Stacey-Ann Chin amongst others and Afrobeat with Femi Kuti. The above mentioned was the most energetic panel  discussion by far, and the heated debates had to do with whether the use of indigenous language would be less unifying than that of colonial languages, with patriarchal values and the history of women in Africa and with tradition vs. modernity, revealing in my opinion a need to discuss more of these key themes through the prism of the arts.

Especially on the day of the YouthSummit, we discussed technology and how online tools can be used to create change. However, there wasn’t a plenary on technology in the OpenForum programme, which I think would have been rewarding. Technology is playing such a key role in shaping African spaces and in building cultural identities, so a prioritized discussion on for example developing African apps, social media, on its effects and uses towards environmentally-friendly practices and on how the continent is leading the way in mobile technology are platforms that are very much connected to money, sex and power.

If there was one thing that was present in every plenary, panel discussion, lunch discussion or workshop session, it was revolution. And furthermore, it was largely about a revolution that takes place within. Mona El Tahawy put it best when she spoke of the Egyptian protests and concluded by saying that now that Egyptians had succeeded in removing Mubarak from office, the next critical step was to remove “Mubarak” from their heads and bedrooms.

Revolution as “a dramatic and wide-reaching change in the way something works or is organized or in people’s ideas about it”, is the type of change that is necessary not only in Africa, but all across our world.

What themes would you add? Any other thoughts?