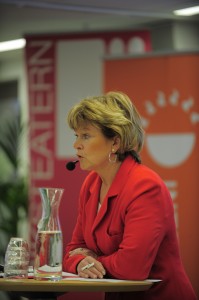 I don’t tend to get surprised about racist acts, at least not when it’s so stereotypical as this whole tragic ordeal with the Swedish culture minister eating a cake of what is supposed to be a mutilated African woman. As a mixed race person I’ve experienced racism from the places where it possibly chafes the most; from family members, and from both sides, so I am rarely bewildered by people’s prejudices.

But although I may not get surprised, I get angry. Always. Very. And in this case, I don’t care how politically motivated the designer of the cake, Makode Linde, claims his work was, there is no excuse for him to refer to that horrendous thing as ‘art’. As stated in a previous post discussing art, if creativity isn’t about community in one-way or another it is dull at worst and provoking at best. Makonde Linde’s is both.

I moved from Sweden after living there for about a decade, and events like this make it tempting to start listing all the bad things and reasons why I left. I won’t just now. But I will say that the hidden racism in that country, like in many others, is epidemic and the sooner we start talking about this uncomfortable truth the better. How could not a single one of those people in that room object to eating African mutilated vagina cake!!??

Most of our societies have shifted from oral to text and now to image-centred communication. THE POWER OF IMAGES CREATE THE MYTHS OF OUR TIMES.
The images that categorize people whether by gender, race, ethnicity, sexual orientation and so on have a profound effect on our worldviews. And yet most of the images we see of black women are either exotically sexualized creatures like Josephine Baker or Nicki Minaj or unshapely mother hens, like the Aunt Jemima’s pancake mix stereotype, or the maid in The Help. In 2012 one would’ve hoped at the very least not to be seeing the worst of them all, the Sarah Baartman caricature.