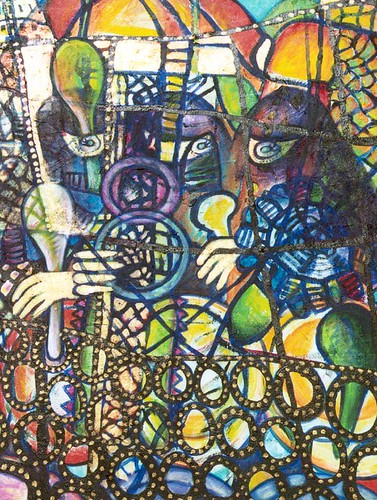 Upon hearing the term African feminist, many African men and women will say, we as Africans don’t need feminism, we just need to return to our roots to see that there was harmony between the genders.

The first problem with such a statement is that Africa is not that simple. African pasts are complex and not necessarily the utopias that Afro-romanticists would like to (re)produce. African philosophy, like others, was at times to the benefit and at times to the detriment of community. For example, whilst the kingdom of Ife produced art that Europe would not be able to match until a century later and that was so sophisticated the Guardian now calls it a “place richer than Atlantis”, its art also reveals customs that most of us would disapprove of today, like slavery.
Secondly, and more importantly, modern African nations have no intention whatsoever of reinstalling this glorified African gender equilibrium. It’s like expecting white people to be at the forefront of confronting institutional and everyday racism that negatively affects non-whites; it just not realistic, as we have seen in recent tragedies like the murder of Trayvon Martin, the cringing Kony2012 campaign and Europe’s continued underdeveloping of Africa.
Therefore, although the past is a necessary point of reference, the question that matters is how can we develop out of the present, not the past.

Looking for example at how, during pre-independence struggles, African women were out on the streets side by side with men, and also without them, demanding autonomy from the colonial occupiers. Why is it, then, that women’s role in post-independent nation-building has no symmetry with their past role in actually creating the nations? Instead, and quite bizarrely considering the damages of colonial dictatorship, women’s roles mirror certain 18th century white western philosophical ways (Roussaeu, anyone?) of thinking about gender, where women are to biologically, culturally and symbolically reproduce nationalist ideas without having a hand in shaping policy and democratic processes.

Nationalism and patriarchy go hand in hand, that’s why. If the nation, as we know it, doesn’t control women, it runs the risk of collapsing and African feminist critique exposes this fragility. This is a thorn in the African patriarch’s backside.

Actually, for African politics to give gender equality significance, it is crucial that African feminist ideas are merged with Gender and Development (GAD) because otherwise GAD can more easily fit into the patriarchal definition of progress where it unthreateningly poses a mere micro-political concern.

As the latest UN report on Development shows, “increased prosperity for a nation as a whole won’t necessarily make it any easier for a woman to get an education, start a business, or have access to birth control”. Whilst I’m by no means wishing to devalue development work, the truth is that equality can’t be achieved as a side effect of it, rather equality needs to be part of social and political culture which fully examines, and opposes, the machinery that subordinates African women.