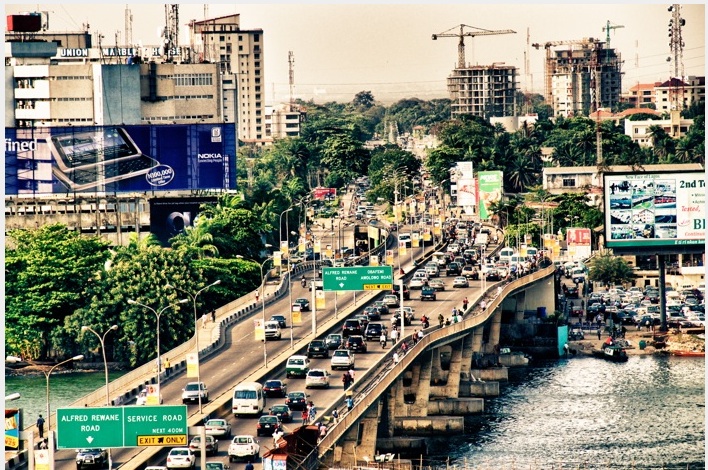 First things first, Lagos is not a bed of roses. You may have Nigerian friends who have told you stories about extravagant nightclubs and cruising on motor boats to privately owned beaches. They aren’t lying, I have often enjoyed such luxuries myself. But that’s the Lagos that makes people forget about the rest of Lagos, the confounded, bizarre Lagos that growls at dawn and prays at dusk.

This Lagos, which I also love, seems ecologically speaking, to be an equally measured amalgam of rubbish, water, cement and tropical vegetation all flowing into each other.
Its infrastructure is often a disharmonious patchwork; some places use traffic lights, others don’t; some roads have lanes, others don’t; many suburbs share only in common that they have sprung up from the swamps, for example the deprived Makoko and the affluent Lekki.
Lagos in Portuguese means lakes; and as lakes do, the streams of the city shift. A dumping ground today can be a playground tomorrow. Or a goat market. Or a church!

The problem, for it is a major problem, is disorder. You cannot create order from a disordered frame of mind. And a mind, which is stuck between worlds and times, as ours collectively are, cannot know order.
The (uncomfortable) truth is that urban city life is “un-African” to the extent that modernity is. Modern urban cities need reliable governance to function, they need a state that will allocate its citizens each their plot of order.

The solution is to embrace the disruption, in a spade-is-a-spade kind of way and start visualizing a modern Lagos that isn’t a caricature of a western city but an authentically African hub suitable for African culture/s. A modern Pan African mega city. Ah, paradise. . . The difference, is similar to that between a wife who pretends to believe her cheating husband’s lies for the sake of stability and the one who truly believes him. Or something such.

Visit Lagos if yours is a mindset that is not interested in facades, even though you do get an abundance of those here; from mansions built of marble to bars where a $1000 dollar weave tag is the norm, the jagged edges of Lagos will stab you right in the third eye and make you wiser and wittier if you allow it. This is the type of truth you should come here to see. The ‘don’t teach me nonsense’ truth as Fela said. If you want to lie on an exotic beach and imagine that the world is a rosy paradise, and hey sometimes that’s a necessary blessing, then don’t come to Lagos.
Come to Lagos only if you want to experience the taste of postcolonial African urban living. If you want a feel of what looks to be the worlds 3rd largest city in 3 years. If you want to know a city that has made vast contributions to globalisation since the 15th century. A city that seethes of art and creativity. A city where you can every moment taste potential, a taste simultaneously sweet as a mango and bitter as ale.