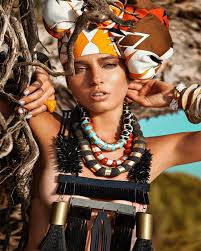 African style is very much in vogue. Numerous runways in both New York and London fashion weeks could as well be called African fashion week. There were African influenced textiles such as the Malian Bogolan, also known as tribal in Donna Karan-review-speak. Proenza Schouler also gave a preview of their take on ‘modern tribal’, a key trend next year. African-inspired headwraps crowned the runways, however, this sophisticated African accessory was more likely to go down as the colonial look. Of course, prints inspired by the big five (Kors, Kors, Kors, Kors and Kors) were present too. Not to mention Burberry’s ankara revival.

The only thing that was painfully absent on this African fashion savannah was, well, Africans themselves.

For those of us experiencing yet another African moment in fashion, we took notes on the African-inspired trends for spring/summer 2012 and wondered where are all the African designers?

The answer is that they are in the so called heart of darkness looking for the next tribal bone to hang around the necks of noble tribesmen and hunting for exotic animal prints that will decorate their textiles. They are drafting raffia skirts on local bush dwellers and drumming up endearing tribal beadworks. They are in other words, paving the way for the international fashion elite, who will be inspired by them but give them no credit as they dictate the next exotic trend to style-craving fashionistas.

Oh indeed, African fashion has much to offer western designers as we know all too well. From Kenzo to Yves Saint Laurent to Ralph Lauren to Thierry Mugler to Malene Birger, the big players habitually pinch ideas from the African continent and that’s all right; the world is and should be a diverse source of inspiration for all. What’s problematic is the lack of credit to the African fashion industry, in so doing stifling its progress, as well as the appropriation of African fashion aesthetic into a perpetual spiral of tribal, colonial and exotic.