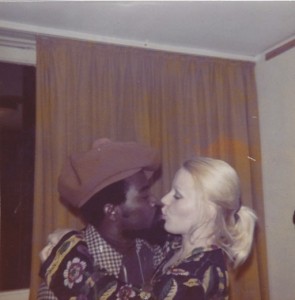 How can someone who claims to be a chosen messenger of god advocate such divisive, confused and love-lacking opinion as Pastor Tapiwa Muzvidziwa?
“God”, he says, disapproves of mixed marriages as these are “wrong” and detrimental to the children born of such relationships. Doesn’t he understand that the whole idea of banning interracial and interfaith relationships is deep rooted in racist doctrine to keep the white race “pure”?

I feature in the same Channel 4 4thought series Should we raise children in mixed marriages? this week. My segment airs on Sunday evening but will also be online for readers based outside of the UK who would like to tune in to the debate.

I’ve written about how I grew up in an interfaith and interracial family before and about issues interracial children might face in the Mixed Race series. So I’m not denying that there are complexities that people like myself must deal with, but the fact is that everyone has to come to grips with who they are, even our dear pastor who as a born again Christian assumedly hasn’t always had all the answers available in this beautiful kaleidoscope of experience that we call life.

BBC 2 is also running a mixed race season starting today. Britain in 2011 has proportionately one of the largest mixed population in the Western world, and the season explores the mixed race experience in Britain – and around the world – from the distant past to the present-day, to analyse the mixed race story.

Here are seven stats from the BBC programme website about Mixed Race population in UK that you may not know and that I’d love you to discuss:

Full “Mixed” category was first introduced ten years ago
Categorisation for the full ‘Mixed’ group was introduced for the first time in 2001, before which there had been no reliable estimate of the size of the mixed race population (Source: Peter J Aspinall 2000)

Mixed Race are considered most beautiful
This was the conclusion of a major research study, the largest of its kind, undertaken by Dr Michael Lewis, (School of Psychology, Cardiff University) in March 2010.(Source: https://www.perceptionweb.com/abstract.cgi?id=p6626)

Legislation to prohibit race mixing has only recently been abolished in some parts of the world
In several parts of the world, including South Africa during the apartheid era, governments introduced legislation to prohibit race mixing. Laws against “miscegenation” were still in force in 16 American states until they were declared unconstitutional by the US Supreme Court’s verdict in the Loving v Virginia case of 1967. (Source: Loving V Virginia).

Mixed Race at greater risk of violence
In 2002/03, adults from a Mixed Race or Asian background were more likely than those from other ethnic groups to be victims of crime in England and Wales. Almost half (46 per cent) of mixed race adults had been the victim of a crime. (Source: ONS 2003).

Thoughts on any of these or on mixed race in general?