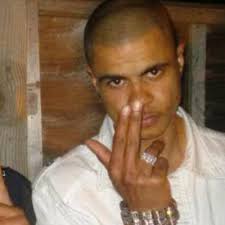 This is the picture the media is using to remember the man who unawarely, post-mortem, instigated the UK riots.
Some see what is intended – a dangerous black man making gun gestures.
To others, this is a picture of another ‘cheap’ black life taken unjustly and irreplacably. A man with a defiant look in his eyes, an embodiment of a social system that nourishes difference. In a fragment of that type of society, a rebel.
Duggan’s family say, “We don’t want Mark portrayed as some kind of gangster. He was a good man, a family man.”

For sake of clarification – I’m aware that the vast amount of the looters are opportunistic criminals. This article is not discussing that group, UK Prime Minister, David Cameron, and other politicians seem in fact to be addressing only those people.
However, I’m quite interested in discussing those young men and women that have that same lost look of defiance in their eyes that Duggan has in this picture. Those that set buildings on fire for the sake of it, those that fought the police, those that literally went to war against society.

Life’s cycles sees adolescence as the stage of life when we unprecedentedly are susceptible to injustice because we are coming to see the world with independent eyes for the first time. Adolescence is also a time when we don’t always know how to deal with pain internally.
We have much to learn from the youth therefore. If we are the conscience, they are the shadow of our conscience. And right now, a considerable amount are reflecting something foul, a recurrent rotting wound.
These youth are a reminder that you cannot dress up in bubble wrap, protecting yourself from the sharp edges of reality. Pop the bubbles, it will make you feel lighter. Metaphorically speaking, our adolescent shadow does not harbour this much anger for no reason. It is lazy to see the animosity as detached from our own actions.

A mature society would be able to deal with issues like the difference placed in the value of life. Or with non-inclusive gentrification. And with people seeing crime in their community through racially segregated lenses, as I wrote in Hackney Citizen last year.

Personally, I feel rebellious too, why is a black life still worth less than a white life. Why did the police kill a young man who did not deserve to die? Why were people who peacefully demanded answers treated so unjustly?
I certainly don’t want to destroy anyone else’s life to prove my rebellion. Yet I don’t wish to crush the rebellion in some of these youth either, not even as they stand at my doorstep in all their threatening rage. What I wish is that we could discuss the needs behind the rioters’ actions with integrity.

Okay, address criminality with the “muscular” language so familiar to the establishment. Maybe there is room for that draconian, military approach. But who will address that so many kids have been let down by a systemic failure to address inequality? Who will explain that the roots of rebellion is freedom, is love?

It won’t be the same politicians or police who’ve been sleeping with media as recent scandals revealed. It won’t be those who don’t want to disturb a comfortable reality, one where injustice is not something to be destroyed nor rebuilt at anyone’s inconvenience. Yet as history repeats, we must ask ourselves the questions, for how long can we blind to our own shadows?