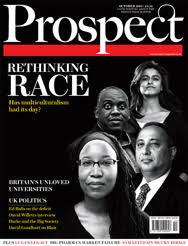 This is a cross-post

On the second day of the UK riots I boarded a flight from Finland to London where I live. Before take off I went through tweets containing the #londonriots hash tag. I then tweeted my shock over the amount of racist comments to do with the riots. Three hours later when I landed in London I had received more @mentions than I could ever imagine. Most of them looked like this. 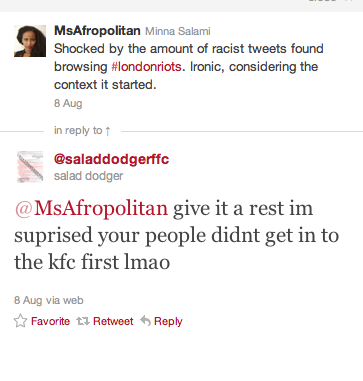 Then there was that well-known historian who blamed black culture for the riots. I think we should not be too surprised about David Starkey, after all this is the same man who quotes Enoch Powell and claims that women historians turn history into a bizarre soap opera. (Why do racism & misogyny so often go hand-in-hand?)
Anyway, more disturbing are the views of David Goodhart, founder and editor-at-large of one of the UK’s most respected publications, Prospect Magazine. Goodhart has gotten away mildly with his dangerously misleading arguments. Apart from blaming the riots on what he refers to as the “Anglo-Jamaican tragedy” he’s been writing these kinds of things:

The nihilistic grievance culture of the black inner city, fanned by parts of the hip-hop/rap scene and copied by many white people, has created a hardcore sub-culture of post-political disaffection. The disaffection is mainly unjustified. It’s as if the routine brutalities and racist humiliations of 30 to 40 years ago have been lovingly preserved to provide a motor of real anger for what is really just a kind of adolescent pose

Goodhart has also written about the demise of black culture – whatever that is – here and here, he’s beeninterviewed by CNN speaking to Fareed Zakaria and featured on the LA Times weekend talk shows. Another respected UK personality who shares Starkey’s sentiments is author Tony Parsons who in an article for the Mirror blamed the riots on our living “with a lot of scum in our midst” and that “the images of black youths running wild will not be quickly forgotten.”

More disturbing than the racially loaded comments themselves, is that despite their presence we are failing to have an intellectual dialogue about race relations in the UK, for the fear of “race-card” accusations or charges of “racializing” issues.
And we shouldn’t racialize where it is inappropriate. For example, when speaking of the looters, we could all see from the CCTV footage that they were far from being only black.

We should, however, address issues that despite Mr Goodhart’s claims of being contemporarily irrelevant still have undertones of racism such as practices within the law enforcement system, political and academic institutions and in society at large. We should address them because in fact, it seems everywhere but in the UK, the press has been reporting on high levels of racial tension here!
Although not fabricated, the international coverage is one-dimensional and in many ways unfair. I’ve lived in Nigeria, Sweden, Spain and New York and in my experience at least when it comes to cities; there is none that is as racially integrated as London. Sadly, if we don’t keep an honest dialogue about race relations, then we can’t point to the successful examples of integration in the UK either.
I agree with Starkey on one thing, there is “an enforced silence on the matter of race”. It applies, however, not only to black- but also to white culture. Maybe he could start by defining what that is?