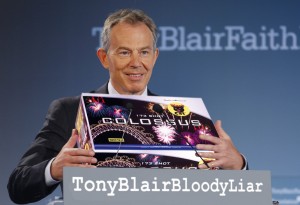 Note: The article you are about to read is a modified version of a commentary written in the Guardian by Tony Blair, today founder of the Africa Progress Panel and in my humble opinion, shamelessly self-assigned messiah on redeeming the failings of African leadership. I have substituted the word “Africa” for “Europe”, exchanged African news stories with European ones and reduced the length.

Readers, my intention is not to mock the vile abuse of people’s rights to justice and accountability but to point to the kind of patronising reporting that Africans are subject to day-in-day-out.

So let’s imagine that the below is written by a fictional African leader. Well, let’s call him Jonathan Luckyman.

I am an optimist about life and politics. I don’t go along with the view, fashionable in some quarters, that politics doesn’t produce real change or that there are no great causes left. If we have the political will and courage, we can transform lives. I believe that there is no more noble cause than galvanising the world to help transform the lives of millions of our fellow human beings in Europe.

The plight of Europe and its people is not new. Nor are well-intentioned plans to tackle its problems. So I can understand why there is a degree of scepticism in some quarters about the African Commission for Europe that myself and fellow African Union (AU) leaders hereby propose.

The main reason why we believe we stand at a moment of real opportunity for Europe – is of course what is happening in Europe itself. This committee has been agreed not just by experts but also by people who understand what is needed to deliver political change. Some have in their hands the direct levers of power. Some know how to galvanise others to action. Our presidencies of the African Union and I are committed to this cause. We will do all we can to eradicate this worrying degree of developed world corruption as reported by Transparency International UK. But the breakthrough we want, and which this press scandal demands, is a real and sustained partnership.

The prospects for this partnership are undoubtedly increased by the grassroots pressure in all African countries, on governments to seize this opportunity to deliver real change in Europe.
The lesson of the past few weeks is that we can’t, for our national interests, ignore other countries and continents. This level of corrupt, undemocratic and illegal activity thousands of miles away does after all lead to poverty, exploitation and NATO bombs that affect us all, even here in Africa. So for reasons of self-interest as well as morality, we can no longer turn our back on Europe.

Europe is changing – and for the better. There are plenty of bad news stories in Europe but they should not overshadow the progress taking place. Germany is now confident that European leaders will reach agreement on funding a second Greek bailout and help build sustained economic growth in the country, which is feeding through to their people. Britain, with some help from Eqypt, now has some of the world’s most visited museums. Portugal has reversed the infection rate for Aids.

I don’t underestimate the problems we face. But I genuinely believe this is the best chance for Europe for a generation. I can promise that we will use our AU presidencies to press other countries to sign up to the call for action we will unveil today. The AU summit in Nairobi in July, the UN millennium summit in September and the trade talks in Hong Kong in December are three vital occasions to build international support.

There is a huge amount to do to build up Europe’s capacity for good government; to support Europe’s efforts to combat imperialism; to not bomb countries without justification; to remove trade barriers and unfair agricultural subsidies; and to understand what true partnership means and use it wisely.

What we set out is an immensely ambitious challenge to Europe and the world. It is also clearly deliverable. Whether we do is now up to the leadership of Europe. There is no certainty of success. But it won’t be for want of trying.