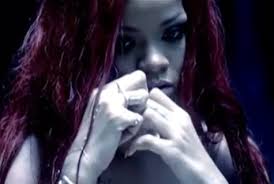 I am feeling Rihanna’s new song ‘Man Down’ and the accompanying video.

The actual song makes me feel like dirty dancing with a pleasant male specimen with the wind and sunshine cocooning us from the rest of the world. YUP!

The video is not similarly inciting. Rihanna acts the role of a woman who follows up a rape by chasing her rapist down and killing him. Of course two wrongs don’t make a right, it would not occur to me to justify murder. But the video is metaphorical, and as such, I think it’s raising an important topic, namely how frustrated many women feel that rape is often not judged as the vicious crime that it is.
We still hear bizarre arguments when it comes to rape; that if a man refuses to use a condom it is not really rape, that there are different categories of rape, that there is a biological factor that prevents men from controlling their ‘natural urges’ and that if a woman wears certain clothes she is asking to get raped and so on.

Here’s an example of the invalidity of the last argument. Last week, was on my way home from yoga wearing a very casual outfit. Not a hijab exactly but by far not the sexiest thing I own. There I am, walking home, minding my own business when a guy stops his car to ask me how much it would cost. To sleep with me, that is. And as if that was not enough, he received semi-encouraging winks from a group of men standing in the corner of the road where this all happened. I wasn’t raped this time, but I definitely felt violated. This is just one example of many, I have more, my friends have more, there are countless examples that prove that what you wear has absolutely nothing to do with sexual assault.

Men who violate women do so primarily because it makes them feel powerful. The guy who stopped the car was after a power trip more so than anything else. He actually knew that I wasn’t a prostitute but he wanted to feel like a Don.

Rape is a power battle, and hence it’s no coincidence that as women demand more power in society, the rape stats are shooting up. In Rhianna’s video the protagonist gets even the only way she can, winning the fight with another weapon and in that fantasy world, buoy, vengeance feels good.