This definition of "Afropolitan" comes from a column I used to write for "Life in Colour" Magazine about Afropolitan events taking place in London.

Last Friday MsAfropolitan and I (some split-personality going on) participated in a wonderful event at the V&A Museum in London. We presented a fashion show and a panel discussion to a visitor count of over 5,000 people. Here are some of our, okay my, thoughts on the event.

By the way, if you’re new to my blog, you will not yet know that I have a thing for the number seven. It’s my lucky number for many reasons, one being that I’m from Ogun state in Nigeria, and seven is the number associated with the Yoruba deity, Ogun. If you would like to explore the ‘Seven’ series you can find them over here.

Keeping with the figure VII, I’m breaking down my perceptions on Friday night’s event into seven concepts:

First and foremost to everyone who attended. What a turnout. What beautiful energy we all came with, inside and out. Huge appreciation to Orla Houston-Jibo, the V&A Curator who recognized the hunger for an event like this at an established UK institution. Gratitude to the panelists and the fashion team + participating designers (ALL LISTED HERE) and particularly to my creative partner, Ola Shobowale of infinite beauty factory. Last but not least to Taiye Tuakli-Wosornu for coining such an apt term to describe Africans of the world.

In the MsAfropolitan presents – What is an Afropolitan? panel discussion one thing that became increasingly clear was that the term Afropolitan means different things to different people. Indeed, Afropolitanism is a tricky idea to define conceptually. This probably has to do with scales, how much one sees Africa and how much one sees cosmopolitan in the term.
Some audience participants expressed concern that the term is about being cool, an interpretation which runs the risk of neglecting some of the real problems that Africa and Africans face.

As Holland Cotter writes about Afropolitan artists in the NY Times:

At the same time they understand, it would seem, that their choices have weight. Postcolonial African art, wherever it is produced, is all but inseparable from politics. In Africa art has always played a social role, assumed moral status, a status that even physical distance …can’t erase.
And so Afropolitanism, young and cool, comes with responsibilities.

I couldn’t agree more. To me, creativity is unappealing if it’s not about community in one way or another. No, I don’t mean that artists should mould their work into some fancy idea, but rather that one should not think creativity is about oneself only. Creativity is telling a story about some aspect of life, whether in solitude or to whomever wants to know it. Afropolitanism may be linked to creative expression, albeit not solely, but this creative expression is in return linked to exploration whether implicitly or explicitly.

In my view Afropolitanism transcends ethnic boundaries, meaning it is not a new label for racial belonging, an Afropolitan is anyone whose vests a part of their identity in the African continent. Elaborating on the definition in the illustration above, I’d add that an Afropolitan is someone who shares in a vision of African progress through a cosmopolitan perspective, or, vice versa. Based on these interpretations, and others, a large amount of Afropolitans are based in Africa – as well as – in global cities. Because yes, Africa has several cosmopolitan cities. Also, many Afropolitans may be white, like this guy.

There’s a wikipedia listing for Afropolitan by the way. Let’s expand it folks!

As I see it, the vocabulary of racial freedom is not enough to deal with these questions. What needs to be done is to discover a language within which these fractured linkages can be understood and redeemed.  I suggest that Afropolitanism is that language and that concept.

Afropolitanism is one tool with which to heal wounds of a history of loss. It’s one way to that ‘language’ and ‘concept’ which Mbembe speaks of. It’s one way to understand that “politics starts with you” as Lulu Kitololo writes. Political awareness is indeed not only expressed through joining a political organisation or such, but by ones lifestyle, through identification within or outside of mainstream- and subcultures and in our case, through a sense of awakening, a belief in the African renaissance…

The Afropolitan is considered revolutionary because s/he occupies spaces such as identity, lifestyle, diaspora, hybridity, arts, fashion, culture, migration, locality, globalism, multilingualism and so on.

When creating the lookbook for the MsAfropolitan presents – The Rise of Afropolitan Fashion, the by far most important thing to me was that the fashion show reflect on the beauty and pride of African women. And on the journeys we have conquered, our presence in modernity, on our empowerment. This is in part what MsAfropolitan is about. The idea was to display an Afropolitan fashion aesthetic incorporating the allure of Fela’s queens, Yaa Asantewa, Queen Nzinga, Sade, Miriam Makeba, Shingai Shoniwa, Simphiwe Dana and many other African women icons. The show captured the spirit of such women, combining a historical trajectory with contemporary appeal. Click on the picture to see more of this concept come to life. What do you think? 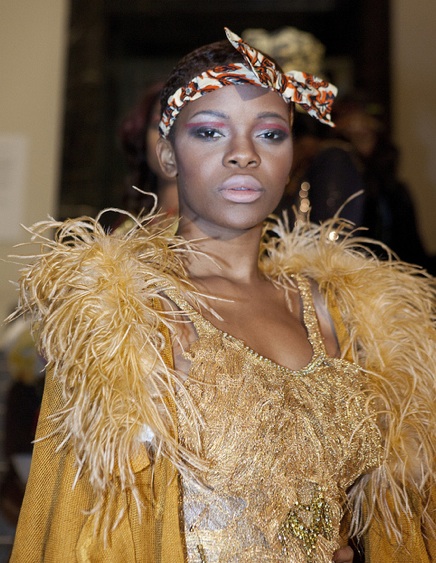 The sounds of Friday Late Afropolitans left a familiar hum in my ear. Spoek Mathambo. Laughter. DJ Vamanos rocking the crowd. Networking and chatter. The kora instrumental by griot Jally Kebba Susso. A sound can transform itself into a place in the brain. I heard Africa.

The idea of community is embedded in many subcultures such as Afroplitanism, Veganism, Farming and so on. On Friday I got to meet several people in my community who I’d thus far only ‘e-met’. It was a treat to meet people like Sheroxlocks, ChichiaLondon, Precious Williams, Annie Q Syed, Nichole Black , Beeladonna and many more all in one place. I don’t know about you guys, but I dig how social media is connecting people in an exceptional way. Communities are important because through identifying shared values people can create change. The Afropolitan community is doing important work through political mobilisation, empowerment through arts & culture, sports etc.

So, community, let’s exchange thoughts! What’cha think about all this?