Writing down some of my new year’s resolutions earlier this year inspired me so much I’ve been maintaining the practice by making ‘new month’s resolutions’. In March my goal was to sleep more and as a result feel more energetic and reconnected with mother and father earth but I failed miserably. Instead March was a month of work and exams, being scolded by the librarian @SOAS  for repeatedly not allowing him to lock up on time, and unhealthy eating and sleeping patterns.
Not much time for peaceful reflection, in other words.

Over the years, my NYE resolutions have become increasingly abstract, with concrete ‘sub-goals’. So for example, this year my journal entry on January 1st started, “My goal is for 2011 to be yet another space in time where I continue a journey towards the spirit, bearing in mind that spirituality and awareness are synonymous. To not neglect awareness, is to become more spiritual. But awareness in itself is a journey, you grasp it one moment and it slips from you the next, however, the residue of understanding which it leaves is what matters.”

Last October I co-hosted the African Writer’s Evening, the only reading that regularly features African Writers outside Africa. In fact, AWE is usually hosted by author Nii Parkes whose book Tail of the Blue Bird is on my reading list for April. Here I am in what looks like an empty room, but it was quite busy. 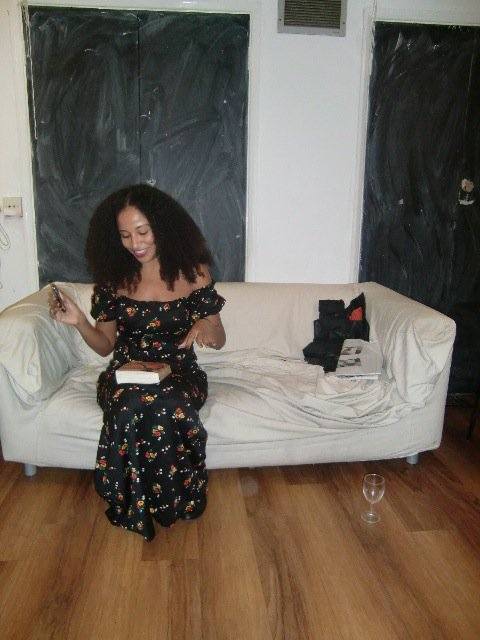 We discussed the novel Bitter Leaf by Chioma Okereke. I enjoyed the book a lot. The love story, which it unfolded around was romantic rather than realistic, the latter being favourable in my opinion, but throughout I found myself taking pauses to chew and regurgitate thoughts on Okereke’s poetic form of writing. The book is set in a fictitious village called Mannobe, a bit like the Africa I have saudade, kaiho and longing for. The main characters, Allegory and Jericho, and all the many others you get to know are all distinctly entertaining and the language they occasionally speak is a seeming mix of Yoruba, Spanish and Portuguese. There’s a great interview with Okereke on Belinda Otas’ blog.

Okereke was on the ‘commonwealth prize for literature’ long list,  and other African women authors receiving well deserved recognition are Aminatta Forna, Lola Shoneyin and Leila Aboulela on the Orange Prize for Fiction long list. I’m folowing the Orange Prize awards with excitement, and I also have made the long list my reading list for the year.

Probably yet another ambitious plan.

How are you doing with your 2011 resolutions?