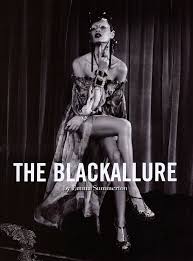 I hate to be a spoilsport, but I don’t see anything fabulous about Vogue’s Black Allure shoot.

In the unlikely case that you have missed it, as marketing gimmicks like this are hard to miss, here’s the link to the photos and the video.

Unlike most of the criticism the editorial has received, my issue with it is not so much that it’s segregational to have an occasional Asian or black issue of a magazine that 99% of the time seem to forget that we exist, although that criticism also seems valid. But I can understand, that with the 2008 black issue selling so well that VOGUE went to reprint for the first time ever, they would want a repeat. Vogue’s editor, Franca Sozzani, may argue against the gimmicky nature of this issue and try to convince us that this was a politically conscious decision. Spare us Sozzani, you are a business, not a charity. That’s why I forgive you, you’re thinking about your sales. Be honest and spare us the rest.

My criticism is actually towards black and ‘minority’ women: Those who once took solace in that, although greatly excluded from the western high-market fashion industry, at least we weren’t being sold that particular look of starvation, submission and exploitation as something fashionable. Lo and behold, we get a VOGUE editorial that manages to incorporate all three and we seem to be doing cartwheels over the fact that we too can play, we too can have images of subordinated brown women shoved in our faces. Yay!

I was unable to find a single black fashion blog, and many blogged about this (as VOGUE no doubt pre-calculated), that had anything negative to say about either the exploiting or segregational nature of the Black Allure spread despite that the video looks like it could be an ad for a brothel.

I blogged about the fashion industry not being for African women before, and these trends give me a new reason to say so. There is nothing empowering about all these black models with cigarettes in their hands, acting out lesbian fantasies for the male gaze in these photos from ARISE, VOGUE and Interview magazines for example. 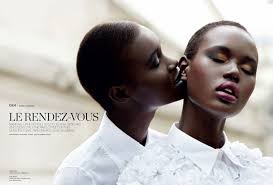 What do you think, can ‘ethnic’ groups participate in high fashion on their own terms, or do we have to accept that its their way or the highway and be happy to be part of the industry?