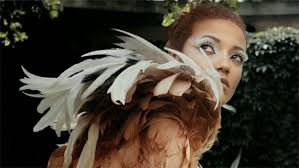 After a shopping round in town today I decided it was about time I watched the video that has the high street in plumes, namely ‘Runaway’ by Kanye West.

My head is now fuzzed with thoughts about chicken breasts and I’m vegetarian, so it’s not because I want some KFC 😉

The short story is that I found ‘Runaway’ a little bit too pseudo-psycho-analytical, or maybe I’m just stupid and don’t get it. The video is trying to say something about ‘real values’ which it then contradicts simply by its existence. Like how much did it cost to produce, for one?

Then there’s the phoenix that Selita Ebanks plays. Historically, the phoenix is a sacred Egyptian symbol of immortality. Thus, the phoenix represents Jesus Christ in Christian belief,  and in Jewish folklore it is believed that the Phoenix was the only animal not to join Adam in his banishment from the Garden of Eden. Here, the phoenix is Kanye’s alter ego?

Back to ‘Runaway’, it seems that Kanye, who also directed the video, was also trying to make a point about femininity.

Dear Kanye, with all due respect, when it comes to life, if it ain’t chickens, it’s feathers. Excuse the pun. I couldn’t relate with the phoenix anymore than I relate with other endangered species.

However, I must put aside some of my ideological views to appreciate the creativity. ‘Runaway’ might be a masturbatory display of a broken ego, but I think it is beautiful in its own way. Selita Ebanks is stunning as a phoenix. The ballet dancers are sooo dope and were coreographed by Afropolitan Yemi Akinyemi, founder of the Dance Academy Prague. As far as visual creativity goes this really is quite inspiring, although for the lack of coherency I don’t find it genial.

Nevertheless, I’d much rather watch this video than a lot of the crap that hip hop artists come out with nowadays.

This is a great clip of black intellectuals (well, and Nelly and TI) discussing sexism in hip hop.

What were your thoughts on Runaway?