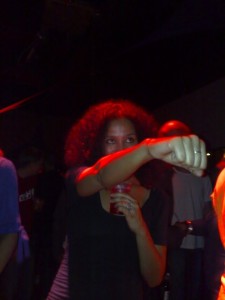 With artists like Beyonce and Jessica Alba recently claiming to be feminists, it might be the case that we will soon see an F-word revival. That would be awesome.

Yet feminism is not simply about being an independent or successful woman. It is about recognizing and taking a critical engagement with patriarchal structures that oppress women such as the institution of marriage or religious doctrine or pop culture. More than anything feminism is a lifestyle choice. As was recorded in the charter of African Feminists in 2006:

Or as novelist Chimamanda Adichie, who calls herself a feminist who likes lipgloss said:

“…being a feminist is about more than outrage; it is about being a woman who likes and stands up for other women.”

As for me, I’ve been a feminist since my early 20s. Since then my worldview, my relationships and my life choices have all been shaped by a conviction that gender structures should not limit my personal and professional growth and that every woman should have that right.
Being a feminist has been a challenge on many levels, it still is. In fact, life would be a helluva lot easier if I wasn’t feminist. One of the challenges I have faced as a feminist has been in relationships. From dating to sex to delegating house chores it has often been a challenge to defy social patterns that place a woman as subordinate to a man. Despite the challenges, which include not only dealing with the opposite sex, but also with family, friendships, career choices…, feminism has been one of the best things that ever happened to me. It has freed me from a life where someone else’s ideas of gender roles define me.

Unfortunately many people disregard feminism without an understanding of what feminism is. In England for example, women earn 28% less than men for the same jobs, in Nigeria women earn 51% of what men earn. Literacy rates for women in Africa are substantially lower than those of men. African women suffer from poverty, HIV, violence, neglected healthcare to notably greater extents that African men, who of course in return also are often victims of oppression. In the West the female body is objectified to a point where a recent study shows that 8 out of 10 women are unhappy with their bodies. Opposing these types of violations of women’s equal rights is what feminism is about.
(sources – Gender Gap Report 2010)

One reason many women don’t consider feminism as an option is because they are afraid that it will alienate men. This is not untrue. I have alienated a few men simply by being a feminist, but turns out I’m quite happy to do that.

Those men that are not terrified by the F-word undermining their masculinity know how awesome it is to be with a feminist.

In a loving relationship no part is subordinate because of their gender, no part is the neck or the head or none of that crap. Both parts are themselves, feminine, masculine, extrovert, introvert, tidy, messy, caring, selfish – whatever they might be, but always equal.