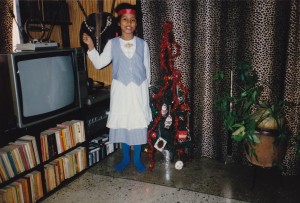 Me in childhood home wearing a Finnish xmas costume

I’m not religious but I believe religion has enriched my life.

I grew up in Lagos, Nigeria in what might be considered a typical African family home. It was a two story house with a three-bedroom flat on the top floor, and another similar flat on ground level. In the back compound there were two one-bedroom flats, one which with time became an office. All spaces were connected by a spiral staircase in the centre of a compound around us.

My family, which consisted of my dad, my mum and I, lived on the top floor. Below us, lived my dad’s elder sister and two of my cousins, her son and daughter. The one-bedroom flats were inhabited in turns by various young uncles and aunties and their families. Eventually when one of the flats became my aunty’s office, the other became the dwelling of grandmama.

The house was also cohabited by workers. Our nightwatch, Moussa, slept on a mat, in a small cubicle which also was his shop, from where he sold everyday groceries, and which was perfumed with incenses from Northern Nigeria. Behind the office there was another small room for grandmama’s caretaker. There were drivers, carpenters, apprentices, house-helps…

In other words, the house was always full of people, and everyone single one was religious.

However, hardly anyone shared the same religious faith. My dad is a Muslim just like grandmama was, with beliefs slightly different from Moussa’s, who also was Muslim. My Aunty was raised Catholic Christian. My mum was raised Protestant Christian. I was raised to build my own relationship with God. I will never forget the precious moments during evening prayers when I would ask my mum the meaning behind our words and she would let me in on her personal interpretations, and why it is important to have those.

When I was seven years old I asked my dad if I was Muslim because he was. He explained to me that Yoruba tradition was one of acceptance, and that the main thing in life was to have faith. I later learned that in the corpus of Ifá (the Yoruba doctrine), there are verses which deal with Islam and those that deal with Christianity. There is for example the ‘myth of Moremi’, where a mother (Moremi) sacrifices her son to save her village. Moremi, is in fact a derivative of Mary, and a lovely anecdote of the accommodating nature of Ifá. Anyway, after my conversation with my dad, I decided that I wanted to be Roman Catholic. The following Sunday, I arrived at the breakfast table wearing my church dress, and announced that I would like to follow my dad’s sister to her church.

I can’t remember how many church sessions I attended, but needless to say my childhood surroundings planted a connection with faith in me making me everlastingly interested in the spirituality of the human individual. Perhaps also because of the many layers of religion present in my young life, at an adult age I reclined from them all, whilst still maintaining respect for religion.

As part of my ongoing quest to build my own relationship with God, I’ve chosen to learn about the big religions, as well as the ones that have been labelled by the West as ‘evil’.

Ifá Orisha tradition, which gave birth to Santeria, Candomble and Voudoun and is practiced by millions all over the world still, bears many truths as does the philosophy of Buddhism, and Islam, Judaism, Christianity etc. Choosing one religion feels to me like choosing to build a house with only a hammer.

With religious intolerance shaping current times, I return to consider my own religious background. The world is changing metaphysically. Countries that used to be powerless are becoming influential and access to information is blurring borders. Those who have held power for centuries are unwilling to accept this natural progress and I believe that there is a link with this sense of loosing power, and anti-Islamic sentiment.

In my childhood home we embraced and learnt from each other’s religions. Eid el-Fitr was as much of a celebration for my Christian family, as Easter was for my muslim family.

The Yoruba’s say ~ A lion does not face peril from a leopard. That is to say, if you come from a place of strength, then why be fearful of that which you consider weaker.

The fear that leads people to want to burn Quran’s, where is that rooted?