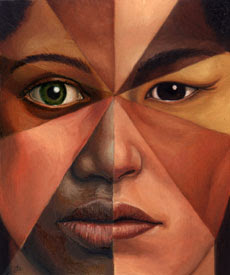 Mixed race girls have issues because when we define ourselves ‘mixed race’, we refer to race.

I’m trying to pay attention to how many times I say ‘race’ whilst talking about myself. This past week I’ve used the word at least five times. (Note, I’ve just used the word race 4 times already)

Inevitably using the word race to define your identity, makes you repetitiously aware of the concept of race. This awareness just might be part of the reason why many mixed race people deal with the polemics of whether they are black, white or mixed race.

Maybe the solution is to drop the word ‘race’, or call ourselves mixed only, or black, like many well-known mixed race people do, Obama, Berry etc. Personally, I’m not consistent with how I label myself, most of the time I call myself black, but I’m also mixed, biracial, multiracial and so on.

As mixed race people are expected to be the largest UK minority by 2020, some argue an all-inclusive word is worth having.The options are not great. Mutt … Coloured…Half-caste…Mixed-blood. There seems a hole in the English dictionary for a word describing the millions of people who are, well, mixed race.

In Finnish, a mixed race person is ruskea, which means brown, in Swedish and Spanish, he/she is a mulatto. Mischling in German was the same word used to denote people who were not from the Third Reich…do you know the word in other languages?

For me, the term Afropolitan defines me better than anything else. It explains who I am culturally and helps me identify people who share similar cosmopolitan African experiences.